Linus Torvalds has just announced the release of Linux 5.1:

So it’s a bit later in the day than I usually do this, just because I was waffling about the release. Partly because I got some small pull requests today, but mostly just because I wasn’t looking forward to the timing of this upcoming 5.2 merge window.

But the last-minute pull requests really weren’t big enough to justify delaying things over, and hopefully the merge window timing won’t be all that painful either. I just happen to have the college graduation of my oldest happen right smack dab in the middle of the upcoming merge window, so I might be effectively offline for a few days there. If worst comes to worst, I’ll extend it to make it all work, but I don’t think it will be needed.

Anyway, on to 5.1 itself. The past week has been pretty calm, and the final patch from rc6 is not all that big. The shortlog is appended, but it’s small changes all over. Networking, filesystem code, drivers, tooling, arch updates. Nothing particularly odd stands out.

Of course, the shortlog below is just for that final calm week. On the whole, 5.1 looks very normal with just over 13k commits (plus another 1k+ if you count merges). Which is pretty much our normal size these days. No way to boil that down to a sane shortlog, with work all over.

Go out and test,

Linux 5.0 release brought us Adiantum file system encryption for fscrypt, support for AMDGPU FreeSync, Btrfs swap file support, Energy-aware Scheduling for Arm big.LITTLE, and many other changes. It was also the first release where I started to cover RISC-V changelog. 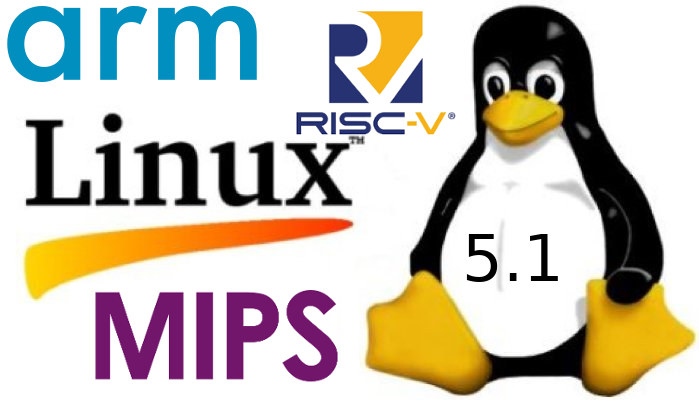 Some newsworthy changes to Linux 5.1 include:

Some of Linux 5.1 changes related to Arm architecture:

Summary of MIPS changelog for Linux 5.1:

You can read a complete Linux 5.1 changelog with comments only here. It has been generated with git log v5.0..v5.1-rc7 --stat. For an easier to read more broad changelog, head over to KernelNewbies.

“Pull RISC-V updates from Palmer Dabbelt”.
Palmer Dabbelt is Director of Software Engineering at SiFive, and maintainer of the RISC-V ports of binutils, GCC, glibc, and Linux.

I agree it’s a bit vague this time around.