Forlinx released two networking SBC’s with 10Gbps Ethernet powered by NXP LS1043A and LS1046A processor nearly exactly one year ago. Like many other networking SBCs they do not come with video output so configuration is done via a computer or laptop either through a UART interface or a web interface.

But in some cases, such boards may be integrated into machines that require a display for human-machine interaction. That’s why Forlinx has now released a new networking board – OK1028A-C – powered by NXP QorIQ Layerscape LS1028A dual-core Cortex-A72 processor that natively supports video output up to 4K UHD resolution via an eDP/DisplayPort interface which the company used to provide an LVDS header. The board also offers 5 Gigabit Ethernet ports, as well as optional WiFi, Bluetooth, and 4G or 5G cellular connectivity via M.2 and mPCIe modules. 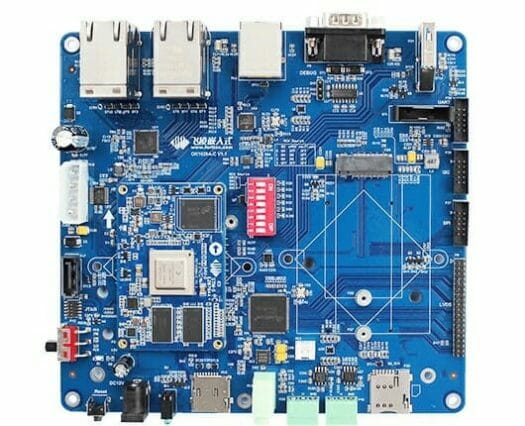 OK1028A-C SBC runs Ubuntu 18.04 with Qt 5.9.9 with the development of HMI applications. Besides 4K video output, LS1028A also adds CAN FD support. While the company leverages the CAN FD, they decided to use an eDP to LVDS connector for their own 10.1-inch LVDS display with a 1280 x 800 resolution.

If you need to test or use higher resolution displays and/or 2.5GbE, you’d need to design your own board for FET1028A-C system-on-module. I asked the company how they tested their module for 4K and 2.5GbE since the development board does not support those, and I’ll update the board if I get an answer.

Both the system-on-module and single board computer appears to be available now at an undisclosed price. More details can be found on the product page. It’s not the first time we write about an NXP LS1028A SoM as last year we covered Miriac MPX-LS1028A module, and the company provides a carrier board with multiple Gigabit Ethernet port (no 2.5GbE ports), and a DisplayPort capable of 4K video output.