[Update Feb 16, 2021: CarDongle used to be called CarDroid, but the company had to change the product name. The rest of the post still uses CarDroid]

Many cars now sell with Android Auto support but infotainment systems compatible with Google’s mobile app may have limitations and that’s why we have started to see third-party solutions such as AAWireless adapter to enable wireless Android Auto on more cars.

Since Android Auto compatible hardware can’t be easily or cheaply upgraded, CarDroid Innovations has introduced CarDroid USB computer that works with Android Auto but instead runs Android 9.0 on a quad or octa-core Cortex-A53 processor clocked at up to 2.0 GHz with improved performance and access to more apps. 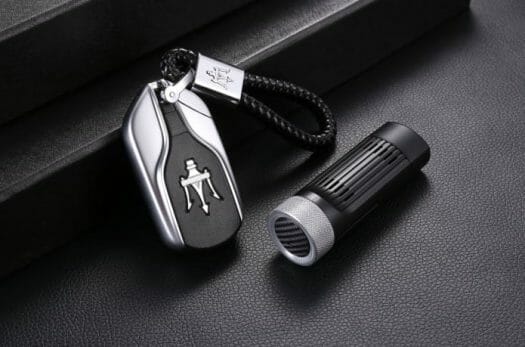 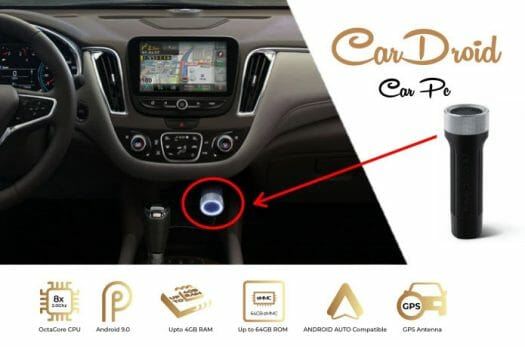 CarDroid works in standalone mode as an Android 9.0 computer, so it can work without a phone and allows you to access apps such as Netflix, Google Maps, Youtube, Social Media, etc.. It gets power from the USB port, connects to WiFi and Bluetooth, and leverages the existing display of your Android Auto infotainment system. The company also promises frequent firmware upgrades. If you’re interested, you may want to double-check if your car is compatible on the Cardroid website.

CarDroid launched on Indiegogo a few weeks ago and already raised over $110,000. Rewards start at $69 for the quad-core model with 2GB RAM, 16GB flash, and the price goes up to $99 for that octa-core model with 4GB RAM, 64GB flash. Those are super early bird prices, and retail prices will be $119 and $149 respectively. Shipping adds around $8, and delivery is expected to start in December 2020.

Thanks for this knowledgeable information

Sorry, I just don’t get it.

When I ride in my car, I am always carrying my own personal computing device. So are my passengers. Any must-have app is most likely already on their personal device.

So why do i need another computer? Particularly one that is less powerful than the one I’m carrying and already intimately familiar with. The only thing I really want is a bluetooth link to connect my existing device to the car audio.

Touch screen displays for the driver are mainly just a distraction. Any additional computer interaction is best done verbally in my opinion.

CarDroid is powered using the USB port, and, it is how the Computer interacts with your touchscreen.

So the newer BMW models won’t be compatible.

We may have support via firmware upgrade later though.

Yes, it could be, but why use a chip with cellular when you’re not going to use it.

“Many cars now sell with Android Auto”. Really? Which cars / brands? I would say NOT Volkwagen Audi Seat Skoda etc … which have 45% of the EU market, AFAIK.

Just based on the claim in the Indiegogo campaign:

CarDroid is connected by Android Auto, which is expected to be available on 95% of the world’s vehicles and 100 million cars worldwide by 2020. Here’s a fraction of the vehicle brands & models compatible with CarDroid.

I thought this may have been hyperbolic,but still have some truth to it so I used “many” instead of “most”.

Oh, wait: Android Auto is the connection protocol to the car media. Not the OS on the car media itself! From wikipedia: “Android Auto is a mobile app developed by Google to mirror features from an Android device, such as a smartphone, to a car’s compatible in-dash information and entertainment head unit.?

https://www.android.com/auto/compatibility/#compatibility-vehicles indeed shows a lot of cars, including Volkwagen etc. My Volkswagen is not on the list, but my spouse’s Volkswagen is, so I can try.

I’ve also just understood that… I’ve made some small edits to the article to avoid the confusion.

Yep – almost all new cars now show ship with both Android Auto and Apple Car Play support (they don’t have to run Android or iOS to do so – they just have to support the UI protocol that is required to handle rendering the Android Auto or Car Play screen from your Android / Apple phone and return joystick etc. navigation information back). Some older cars – such as earlier Renault R-Link based cars – are Android Auto only (as Car Play required a bit more power to support AIUI)

In the videoclip, the demo looks very sllllooooowwww.

Right, I also noticed this and wanted to know which model was being used in the demo? Also, wouldnt it be better to use a screen recording to demonstrate the interface? Would we be able to install and use our own launcher, for example?

It allows your phone to use the car display. So e.g. the navigation from maps can be shown on the display. Typically the car display is bigger and you do not need a holder for your cell phone. Android Auto has a restricted set of applications that can run with limited interaction (so you cannot e.g. watch a video over Android Auto (oh and you may want to use google maps instead of the in-car navigation system because the google maps are more up to date; that is: The Ford maps that I got as an update a few months… Read more »

The points for the Cardroid are two-fold: To eliminate the need for a physical connection to your vehicle’s USB port and to bypass Android Auto’s application limitations. Certainly, there should be a way to view video services while the vehicle is not in motion.

Looking at the Indiegogo website, there is a level of sketchiness to this product. Is it vaporware?

I think I have been doing something similar to this for years. I have an old Android phone (no SIM card) permanently plugged into the USB jack of my car. My car has a built-in wifi-cell hot spot so the old Android phone uses that to get online. I just use it for maps and Spotify.

I wonder if there is some way to get it to behave like a phone using IP?

I just used Google Voice to assign a phone number to my old Android phone in the car. This is cool, now I can send text messages to my car.