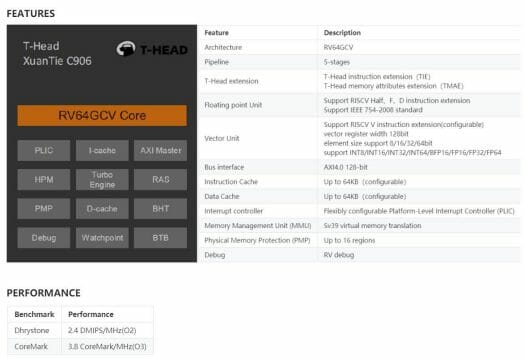 Alibaba unveiled Xuantie-910 RISC-V core (aka XT910) in 2019 for powerful SoC with up to 16 cores, but an update in 2020 revealed the company planned to have a complete RISC-V core family for a wide range of application from low-power microcontrollers to server SoCs.

At the time, I just assumed the company planned to keep their cores to themselves, but time proved me wrong as T-Head, the Alibaba subsidiary in charge of developing RISC-V cores, started to cooperate with Allwinner to develop open-source processors, which should lead to low-cost Linux capable RISC-V SBC very soon according to a tweet from Sipeed.

Good News:
We get first chip which based on XuanTie C906 (RV64GCV),
it have abundant interface (HDMI/RGB/DVP/MIPI/GMAC/…),
and will be able to run Debian system.
Last and most important, the basic dev board price is start at 12.5$ (1% of HiFive Unleashed)。 pic.twitter.com/EJbXTJ5eMb

As far as I understand companies are still under NDA with Allwinner, so they can divulge too much. But here’s what the $12.5 Sipeed Linux RISC-V board specifications should look like based on public information available at this stage:

I don’t have renders for the SBC, but the company will also make an Allwinner RISC-V system-on-module for other projects.

Allwinner RISC-V processor will run the Debian Linux operating system, and the $12.5 price tag for Sipeed SBC makes it the cheapest RISC-V Linux board with MMU by far. You can already run Linux on RISC-V using Kendryte K210 boards, but those are not really practical due to the lack of MMU and low-memory, or on HiFive Unmatched offered for $665 and allows you to build a complete RISC-V PC.

The upcoming Allwinner powered RISC-V board from Sipeed does not come with a 3D GPU, and memory is limited so based on the information currently available, it may end being comparable to a Raspberry Pi Model A+ minus the ability to run any application relying on 3D graphics.

There’s still a lot of work to bring RISC-V ecosystem to the level of Arm, but it’s clearly a step in the right direction. Sipeed says the board will be available in one or two months, so let’s make that Q1 2021 to take into account potential delays.

China is going all-in on RISC-V because Trump’s unrestricted trade war made them belatedly realize how vulnerable they are to CPU architectures subject to US sanctions.

not just China. Outside of the US, I would be wary of being overly dependent on US tech owners. With Arm being part of NVidia, any non-US country could get locked out.

It could explain Allwinner’s tardiness in migrating from Cortex A53 to newer cores if they were considering divesting from ARM.

No Mali = headless. For other use cases, expect them to pair with PowerVR, c.f. Allwinner A100

Imagination is working with Risc – V

They probably have the same limitation for PowerVR, and hope to have a more open GPU, there is no open source driver for PowerVR, only some blob and only for Android version of Linux. I hope we will see a RISC-V GPU emerging soon ? Nvidia spoke about replacing the microcontroler of the GPGPU from their own to a RISC-V version, but they could finally move to ARM microcontroller now they own it, depending on performances in both case ? Or they will be using ARM only for main processor ?? That’s the case of European processor for supercomputers and automotive, ARM… Read more »

Allwinner and Rockchip were both caught out by Amlogics move to 12nm.

There is one RISC-V GPU announced https://www.cnx-software.com/2019/12/04/think-silicon-neoxv-risc-v-gpu/

Not a RISC-V anymore. The “developer” misunderstood what Open Source actually means in the large and decided to move to OpenPower instead. The stuff’s there, plausibly doable. But since he didn’t attempt to make anything WITH it, he was disappointed when they didn’t kow-tow and jump, johnny on the spot and integrate his ideas into the official frameworks. Doesn’t work that way. He may be onto something and you might be able to implement to his ideas…but he’s not even trying to work within the community. Kind of like NVidia or a few others.

A fair description of the LIbre-SOC nee Libre-RISCV hybrid GPU project. However, the Think Silicon GPU referred to above is completely different. They are an existing GPU company and took their existing proprietary ISA and replaced it with RISC-V plus about half a dozen custom instructions. They were showing off the actual thing running FPGA at the RISC-V Summit in December 2019. I talked to them, volunteered what their custom instructions probably were (inverse square root approximation, texture interpolation, …) and they smiled and showed me a disassembly of some of their graphics code … and yup. They said they… Read more »

Why this is not a standard like raspbery pi or pine64.org
(like pinebook pro) I would replace this board in my project

Because it needs more time. The ecosystem is not there yet.

Shame they cannot buy MIPS and merge the two. Would it not leapfrog Risc-V development forward.

How? Mips never has been known as a super performer, at least not after the sgi workstation times (but that was before my interest in IT spawned, so can’t tell)

Heh. The odds are solid you have a MIPS in your router. “Never been known as a super performer…” X-D

There is one detail here, that wasn’t mentioned anywhere else before and makes a world of difference: PoP DDR3 memory. Without it, this upcoming board may be a good alternative to RPi Zero, as many said so before me, but with it, even at 64MB, it might dethrone V3s for projects that require a bit more processing power (C906 seems to have V extension, which is so much better than NEON, that ARM made SVE in its image), rather than video processing.

I’m just been told there may be a version that supports external memory too, but not sure.
It also looks like the initial version was designed with camera interface, but I’ve been told the final chip may not have it.

Is there anyone using the V3s in projects? AFAIK it was discontinued (there are tons available though) and the replacements are all BGA packaged.

If this is QFN or QFP packaged it will be interesting. Especially if it comes in below my current record for a ~1GHz Linux capable chip with memory at $1.6 for a single core or $3 for a dual core.

What chips are those at such low prices?

F1C200s, for often less than a single dollar you get latest chip with ARM9 and 64MB of RAM, previous 32MB variant was featured in first version of Linux-running business card (https://www.cnx-software.com/2019/12/27/this-business-card-is-a-3-linux-computer-powered-by-allwinner-f1c100s-soc/). I think that once someone from Cedrus project (open video codec drivers for Allwinner chips) decides to work on variant for these, they may become an interesting alternative to beefier microcontrollers and current V3s/S3 projects.

>F1C200s, for often less than a single dollar you get latest chip with ARM9

Personally I would avoid putting ARM9 into anything new.

I see nothing wrong with the ARM9 if you don’t need an FPU or high performance. It will work much better for running Linux than an MMU-less Cortex-M, and at least as well as the non-ARM chips in the <$5 price range.

It seems that Allwinner agrees with you though, if the new chip hits the price point of the F1C200S, it won’t just upend the market for ARM9 but also MIPS32 (Ingenic, Mediatek) and single-core ARMv7 by being faster and cheaper.

>I see nothing wrong with the ARM9 if you don’t need an
>FPU or high performance.

Do you think it’ll last much longer in the kernel? I can see support for Cortex A stuff hanging around for a while because the big players are still shipping those.

>it won’t just upend the market for ARM9 but also
>MIPS32 (Ingenic, Mediatek) and single-core ARMv7
>by being faster and cheaper.

I think if there is a QFN version then it will be a killer product.

We added SAMA9X60 and F1C100s support last year and now SD5203. There is a large installed base of AST2400, imx23/28 and LPC32xx that will keep needing updates, as well as hobbyists running modern kernels on e.g. Kirkwood and DaVinci chips. I would hope to retire StrongARM and Xscale eventually, but there are still enough users that these hang around for now. I did queue the patch to remove ebsa110 for linux-5.11, and RiscPC will die as soon as the kernel requires gcc-9 or higher. SAMA9X60 is probably the most important ARM9 at the moment, and I’d expect at least 10… Read more »

Where did you see that the V3s is discontinued? It is still on Allwinner website:
http://www.allwinnertech.com/index.php?c=product&a=index&id=38

For that price I’ll for sure buy it.
I don’t think RISC-V will quickly be able to compete with ARM. I think it will take a long time.
Maybe if NVIDIA has taken over ARM and destroyed everything. RISC-V will be ready to compete. ARM is also still evolving quickly, so to catch up it’ll be very hard and would need a lot of investments.
I wonder how the performance per Watt will be. That’s the most important thing for the future.

If they’re in keeping with the domains that VexRiscv and Rocket cores are, it’s 15% faster, 15% smaller, and 15% lower power than the comparable Cortexes in each respective class.

Will Cedrus will be on this new chip or something else?

This only tells me how far the api foundation is. The zero is $5 and was released 2015. I really like the K210, but these other offerings seem so so.

They’ve got sweetheart deals with Broadcom.

The Pi Zero is not really $5. Try ordering 100 of them at that price. You can’t. It’s a loss leader, one per customer per order with $20 shipping.

Single-core CPU, and 64MB to 256MB DDR3 (built-into processor) … hmmm, very, very embedded, IMHO.
ONly if it indeed runs Debian, and has a network interface, then I want one just to see how usable it is.

The Allwinner RISC-V is coming soon. The chip will be launched next week with documentation, and the SBC will be ready next month based on a tweet from Sipeed.

V3S does NOT have 2D accelerator