StarFive has just announced customers’ delivery of the 64-bit RISC-V Dubhe core based on RV64GC ISA plus bit manipulation, user-level interrupts, as well as the latest Vector 1.0 (V) and Hypervisor (H) instructions.

StarFive Dubhe can be clocked up to 2 GHz on a 12nm TSMC process node, and the company also released performance numbers with a SPECint2006 score of 8.9/GHz, a Dhrystone score of 6.6 DMIPS/MHz, and a CoreMark score of 7.6/MHz. A third-party source told CNX Software it should be equivalent to the SiFive Performance P550 RISC-V core announced last summer, itself comparable to Cortex-A75. 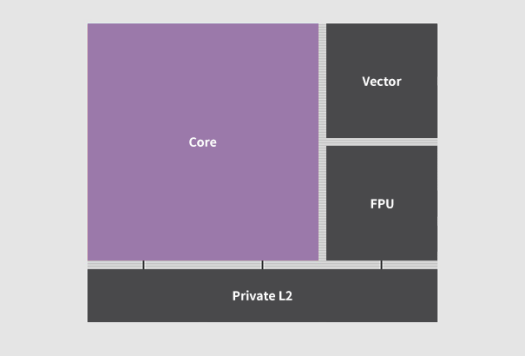 StarFive has licensing agreements with SiFive, while being free to license its own RISC-V cores like the Dubhe, and that’s why you’ll find Dubhe together with SiFive U-Series, S-Series, etc.. on StarFive CPU cores page. Besides CPU IP, StarFive also provides its own full SoCs like the SiFive U74 based StarFive JH7100 processor found in the VisionFive V1 board that has just launched. So I would not be surprised if we see a Dubhe single board computer by the end of 2022 or sometime in 2023.

Isn’t that nigh-identical to a Cortex A73?

Yeah its not just compilers and libs either, Im not convinced that a lot of cheap SoC’s report their operating clocks accurately either, especially MTK based devices Im not too concerned about absolute accuracy, I just wanted a relative comparison between the A35, 53, 57, 72, 73, 75 & 77 devices I had available. I tested using the same binary on the same OS image (except 4 different kernels, 2 mainline 5.10, 2 oem BSP 5.4) and the results I got were within a few % mostly of what Arm publishes for the earlier cores. Not hugely meaningful and split… Read more »

> I tested using the same binary on the same OS image

Oh, then these scores are really something one can rely on to order different CPU cores 🙂

Wrt sysfs numbers that pretend to represent clockspeeds: no need to trust, simply measure next time…

Awesome thanks, I hadnt seen that project before. I was thinking of writing something similar then I didnt have the motivation once Id done the testing lol

Better thank Willy next time you encounter him here in the comments. BTW: I keep a collection of such clockspeed measurements here (but neither MTK nor Qualcomm included).

Hehe I don’t need to be thanked. Many of us used to be victims of some vendor scams (with amlogic and rockchip commonly leading the movement), and at least we can say that thanks to our collective efforts we all managed to put an end to this practice that’s just old memories by now. That was the exact reason why I originally created this tool, and I wanted to create a standard hardware assessment tool that I didn’t have to make since Thomas did it 🙂 And with Jean-Luc using it with each and every board under review there’s very… Read more »

History definitely has a way of repeating.

Whatever you do, just don’t make a repeat of ARM China.

I think its performance should be around cortex a76