So far a limited number of PineNote prototypes had been sent to developers, but it’s now possible to order the PineNote Developer Edition for $399 directly on the Pine64 store. As its name implies, the e-Reader is not ready for end-users, but recent progress with mainline Linux makes it suitable for developers and enthusiasts who want to play around with the device knowing much more work is needed to make it a usable device. 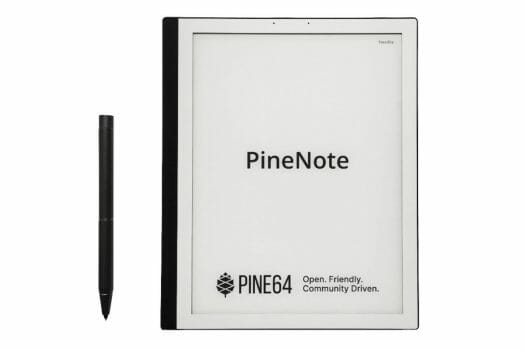 The specifications remain the same as in the initial PineNote announcement:

The PineNote Developer Edition ships with a USB-A to USB-C charging cable, Quick Start User Manual, an EMR Pen, and a protective cover. 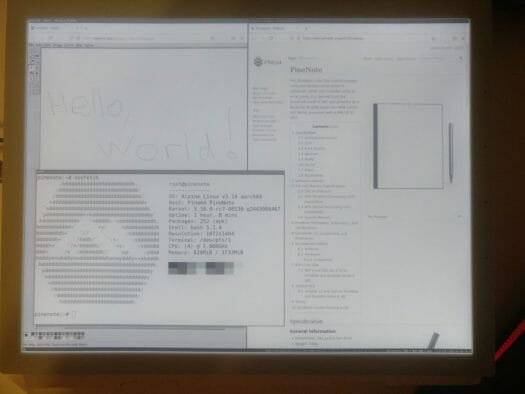 The developer edition only ships with a bootloader, no operating system, so you’d have to install, or even build, your own. The photo above shows the PineNote running Alpine Linux v3.14 with Linux 5.16-rc7 (mainline), and a functioning DRM (Direct Rendering Manager) driver for the device’s e-ink controller and panel. It’s still an early version that uses the basic grayscale waveform, and support for optimized anti-ghosting waveforms, the fast monochrome waveform used for low-latency pen input, and the dithering waveform needed to watch videos is coming later on.

Still, this should allow developed to optimize programs for E-ink displays with notably the removal of animations, maximizing contrast, and checking whether the information conveyed through colors is still usable on a grayscale display

Software development support for PineNote has greatly been helped by earlier work on Quartz64 SBC, and the next Linux kernel release (Linux 5.17) should get USB OTG, touch screen, and audio playback. Pine64 community reports only the microphone array and Bluetooth are currently unsupported.

The “software releases” section of PineNote’s Wiki is currently empty simply stating “Not yet available”, so they are not kidding when saying the e-Reader is only for developers at this time, and instructions to build U-boot and the kernel from scratch, get a minimal rootfs, flash everything with a forked version of Rkdeveloptool can be found in a separate page of Pine64 wiki.

Well, there it is. The world’s most powerful e-reader.

Well some users have long ago setup a RPi 4 8GB board with 512 GB SSD and Waveshare eink displays. The PCIe port supports 10 Gbps ethernet devices and also HifiBerry is one of the best DACs for such boards.

I though chips like RK3566 aren’t really “mobile” chips. Should we expect good battery life?

RK3566/RK3568 are meant to be combined with Rockchip’s RK817/RK809 (PMIC, charge controller and Audio codec). So they are designed for mobile use cases.

I guess my followup would be – is there a particular reason why these chips rarely end up in mobile devices like phones/tablets? (I can only think of the Pinephone) My mental association was with these non-mobile TV boxes

> is there a particular reason why these chips rarely end up in mobile devices like phones/tablets?

RK356x is rather new so it needs some time for Linux software support to mature if you’re keen on running Linux on these gadgets and not just Android + forward ported BSP kernel from hell.

Both the original and Pro version rely on such SoC/PMIC combinations with mature Linux support at time of production (AKA ‘years after introduction’).

> Should we expect good battery life?

ARM SoCs contain at least one MCU designed amongst other things for deep sleep state (keeping the MCU alive while shutting everything else down). With RK’s BSP I would expect this to work OOB while with mainline it might be a long journey for this to work.

Most probably Linux for PineNote with excellent battery life will be stuck to BSP kernel (4.19) but better wait for someone to comment who is actually into RK356x development.

At least LCD+backlight that significantly lower a tablet’s battery life are no issue here.

Android only, and shipping is now delayed until March 2022. It’s not sure if it will happen, but once/if it does we’ll have more details about battery life.

Not sure I see the point, lower resolution than a tablet and almost the same weight?

eReaders at least are super lightweight

> Not sure I see the point

Imagine a concept called ‘being outside’ combined with ‘paperless’ 😉

That’s what I like the Kindle for. Lightweight, small, cheap.

Think about ordinary PDF or any other format that represents ‘static page layout’ and not ebook formats that automagically reflow on small screens.

Only a few fraction of PDFs are prepared for accessibility/reflow which would allow to be displayed in a reasonable way on small displays. Majority of PDF works only in fullscreen mode so the higher the resolution and the larger the screen the better.

The other thing it does well, and Kindle doesn’t do at all to my knowledge, is the same thing real paper is otherwise good for – namely handwriting. I’ve used an iPad with the Apple pen and a Samsung Chromebook with a stylus before, so this is all I can compare it to. Writing on e-paper is a distinctly different experience. I can’t really pin-point what sets it apart, but I suspect a combination of the following factors contribute to it: the stylus input appears nearly instantly; the stylus input is noticably less processed (more raw and imperfect) compared to… Read more »

I’ve been wanting a e-Reader but not from Amazon, because they are amazon, and this is a really cool product.

Why not Kobo then?

This 10.3 inches is still smaller than I’d like for sitting around reading arxiv.org pdf’s. Those are US letter size or A4, in either case about 14 inches diagonal.

Also, has Pine ever shipped an actual finished product rather than a “developer edition” with incomplete software? $400 is pretty steep for a partway working device. I’m still more interested in the Inkplate 10, I would say. The same thing is going on with their phones and many other gadgets. Well I guess there is the Pinecil soldering iron.