Linus Torvalds has just announced the release of Linux 5.16:

Not a lot here since -rc8, which is not unexpected. We had that extra week due to the holidays, and it’s not like we had lots of last-minute things that needed to be sorted out.

So this mainly contains some driver fixes (mainly networking and rdma), a cgroup credential use fix, a few core networking fixes, a couple of last-minute reverts, and some other random noise. The appended shortlog is so small that you might as well scroll through it.

This obviously means that the merge window for 5.17 opens tomorrow, and I’m happy to say I already have several pending early pull requests. I wish I had even more, because this merge window is going to be somewhat painful due to unfortunate travel for family reasons. So I’ll be doing most of it on the road on a laptop – something I generally try to avoid.

That said, the merging part of the merge window works perfectly well on a laptop, it’s just that I normally really want to do more local build testing between merges than a laptop really allows me to do. So the main downside during travel is that I end up relying much more on the automated build testing in the cloud. And so really hope that everything has been properly cooking in linux-next so that there are no unnecessary issues that pop up when things hit my tree.

Of course, realistically our automated build testing is so good anyway, and people have been pretty good about linux-next, that maybe my local builds aren’t _that_ important. I do end up occasionally hitting issues that should never have made it as far as my tree, but it’s not like it’s a common – or generally serious – issue.

Anyway, I don’t expect any real issue, but I’ll probably be jetlagged and in odd timezones, so my response time might be “variable”.

But hey, before that merge window even opens, you still have some time to give a shiny new kernel release some TLC and testing. 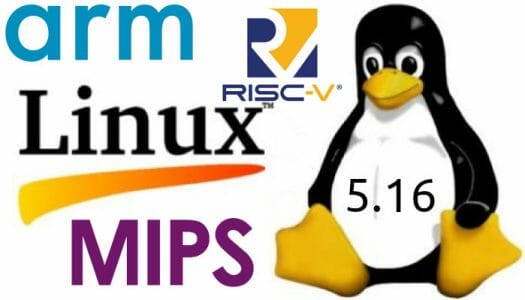 Some interesting updates and additions to the Linux 5.16 kernel include:

Changelog for RISC-V in Linux 5.16

Some changes in Linux 5.16 specific to the RISC-V architecture

There were also a few minor changes for the MIPS architecture:

For a more complete Linux 5.16 changelog, you can read the full commit comments,  generated with the command git log v5.15..v5.16-rc8 --stat, or check out the summary on KernelNewbies website.