In the first part of Khadas VIM4 review, I showed off the Amlogic A311D2 SBC and some accessories such as the DIY case and M2X expansion board to add M.2 SSD and modem and tried out OOWOW cloud services to install Ubuntu 20.04 server.

I’ve now just gotten Fiber Internet at home, so it’s much more practical to test the system, and in the second part of the review, I’ve installed Android 11 on the VIM4 board, checked out settings and system info, and ran some benchmarks.  It will be more like a preview since Android 11 is not a consumer-friendly system at this time, and is more designed for people wanting to build their own applications.

Last time around, I used OOWOW system install in the SPI flash on the board to download and install Ubuntu 20.04 server to the eMMC flash on the board. This time around I’ve done the same but with Android 11. If you’ve already installed an operating system on the eMMC flash it will automatically boot to it, but you can keep pressing the Function button, press the Reset button, and then release the Reset button on the VIM4 board to enter OOWOW again. 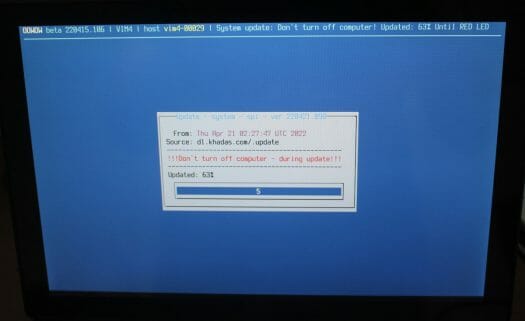 This time around I was told there was an update to the firmware, so I went again and the OOWOW system was upgraded in the SPI flash. After a reboot, I was able to select the available OS images. 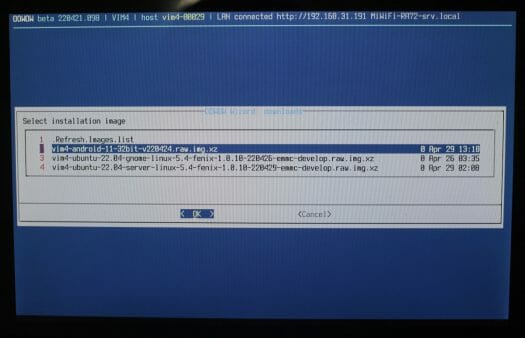 Note that Ubuntu 20.04 is gone, and you’ll have the choice to install Android 11 32-bit or Ubuntu 20.04 Desktop or Server image. We’ll check out the Desktop in part 3, so I went ahead with the Android 11 image. 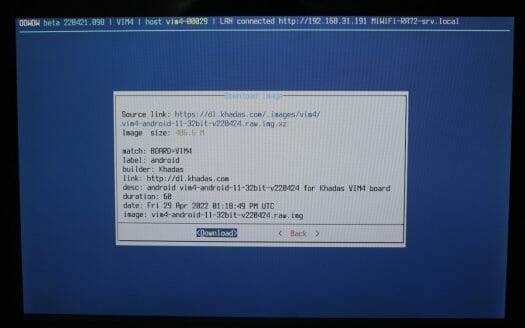 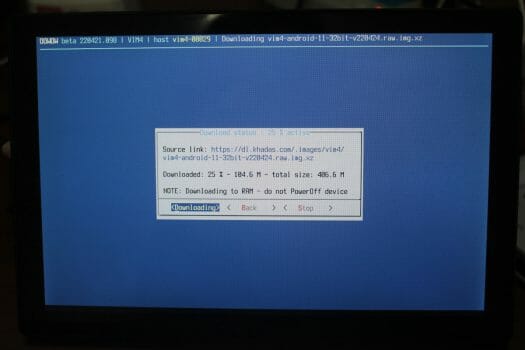 Then I could install it to the eMMC flash… 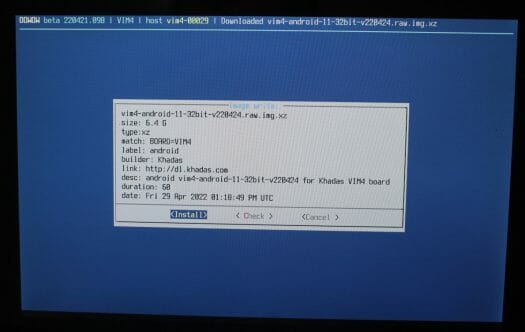 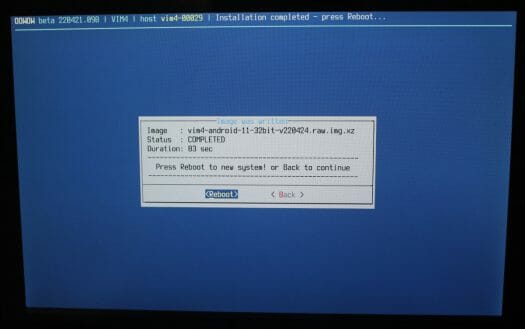 Success! I really like this type of cloud installation firmware, as it only takes a couple of minutes, and no need to play around with MicroSD cards and flashing utilities to switch between operating systems. 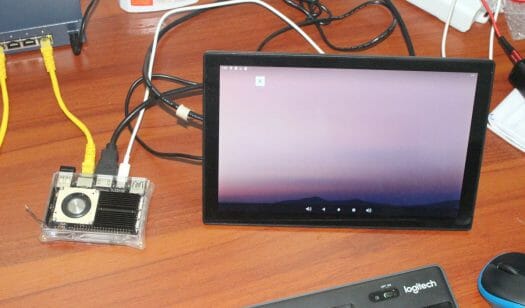 As mentioned in the introduction, it’s not a consumer-oriented release, and like with the initial Khadas VIM3’s Android 9 release, there’s only the bare minimum to get started.

That’s the stock AOSP launcher. If you click on the screenshot above you’ll see that the resolution is 3840×2160, so that’s good news for people wanting a 4K user interface beyond simply the ability to play 4K videos. Most Android systems/TV boxes so far come with 1920×1080 UI resolution. 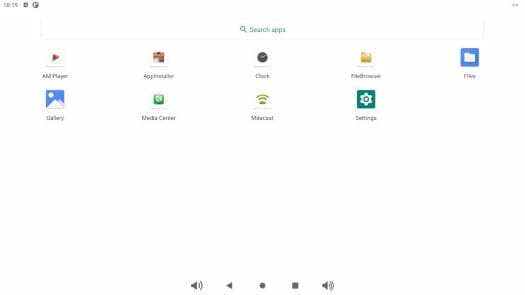 There are only a few apps pre-installed with AM Player, an APK installer, a file browser, and of course the Settings. No Google Play or Google Services. It should be possible to sideload those, but I’m not quite sure how it’s done now, since it’s been a while since I’ve used Android on a single board computer. 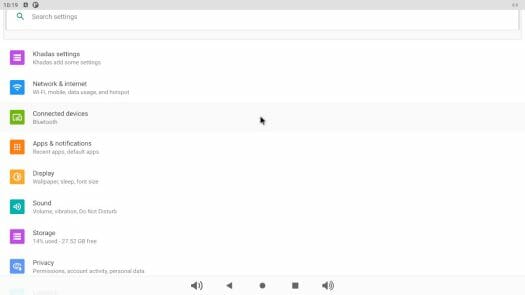 The settings are pretty standard, except for the Khadas settings with HDMI IN for the micro HDMI input port which I’m unable to test right now, Ethernet configuration, fan control, Wake-on-LAN, LEDs control, etc… 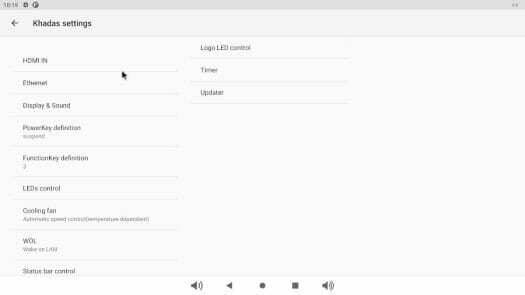 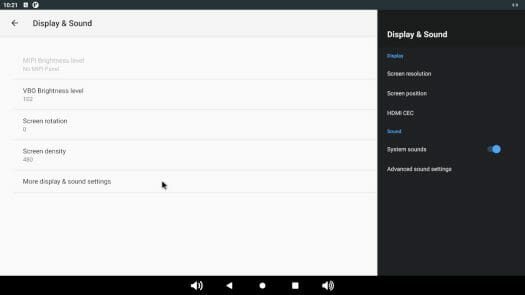 Screen rotation works fine, and it can be useful for digital signage applications. 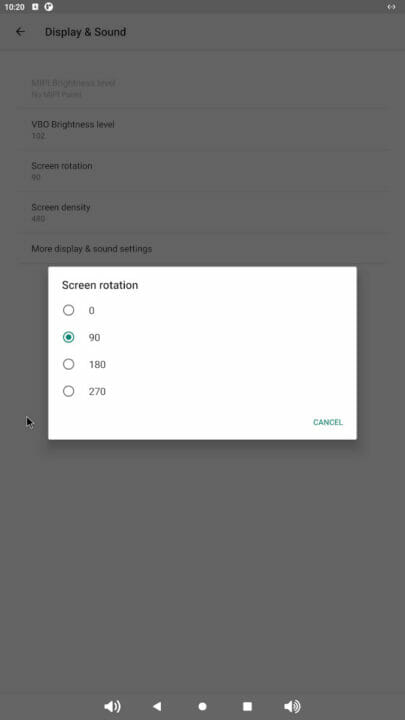 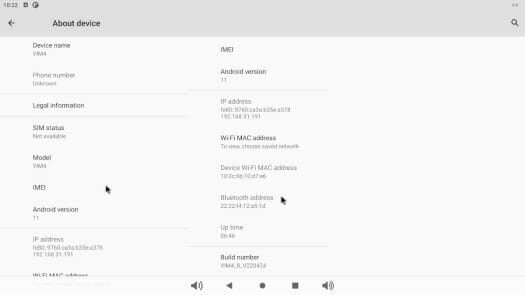 Using WiFi required me to disconnect Ethernet, and I could connect it Xiaomi AX6000 WiFi 6 “Enhanced” router without issue. The upload link speed is 288 Mbps, and the download link speed is 864 Mbps. It works pretty well, but I have not benchmarked it since I’ve damaged one of the antennas during installation (and waiting for a replacement), and I’ll test that in Linux. 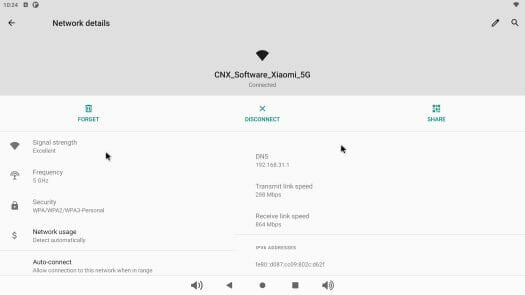 I’ve installed APKpure to install the various apps I needed for testing. Before going into the benchmarks, let’s see what CPU-Z reports.

Unsurprisingly, CPU-Z has never heard about the Amlogic A311D2 processor, but it does properly detects the four Arm Cortex-A73 cores @ 2.21 GHz, and the four Cortex-A53 cores @ 2.02 GHz, plus a Mali-G52 GPU. 7952 MB of total RAM is reported, as well as 25.70 GB of internal storage, and the system is running Android 11 on top of Linux 5.4.125. The accelerometer is also detected and appears to work properly. I’m not sure what khadas_bat temperature is, but 18.8°C is clearly impossible in a room with an ambient temperature of around 28°C.

I first tried 3DMark with Wild Life, the new recommended benchmark, plus Sling Shot Extreme to have a comparison against other platforms. 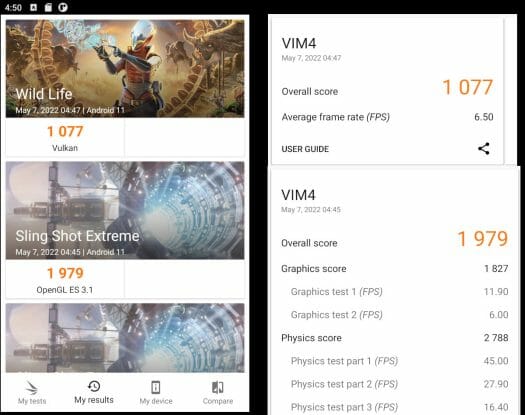 I then tried PCMark 10 Work 3.0, but it got stuck in the “Encoding and muxing”  part of the Video Editing benchmark. I tried three times and got the same results. 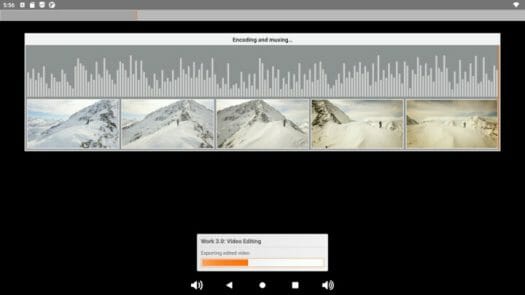 I then sideloaded Antutu 9, but again the benchmark got stuck after a while in the Terracotta Vulkan benchmark in a reproducible manner. 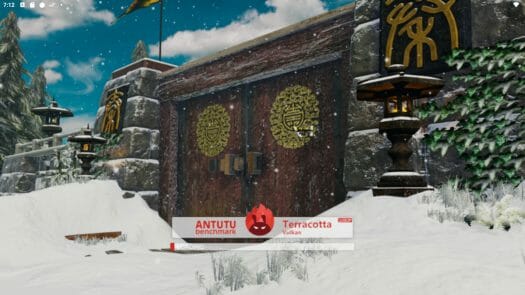 I tried to install Antutu 7.2.3 to get results comparable to what I got with Amlogic A311D and Rockchip RK3399, but sadly, there always seemed to be a mismatch between Antutu and Antutu 3Dbench versions, and the benchmark simply refused to run.

I finally managed to find a benchmark that worked with Passmark PerformanceTest 10 for Android. 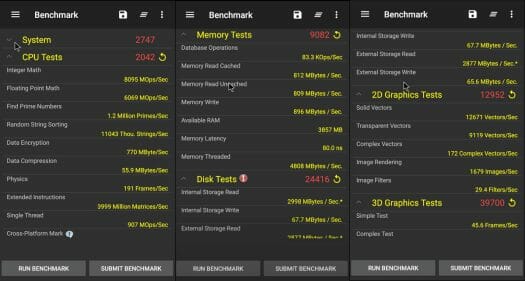 I think it’s the first time I run it on Android, so I can’t compare it directly with other boards I tested myself, but you’ll also find the results online. Note the overall “System” score appears to be on the low side (e.g. Khadas VIM2 gets 2,553 points vs 2747 for VIM4), and I think it’s because the Disk Tests were not taken into account due to caching (3GB/s read speed might not be correct on a 32GB eMMC flash…). So it’s better to look at individual scores, for example, the VIM2 Amlogic S912 board got 1235 points in CPU Mark: 1,235 against 2042 for VIM4. 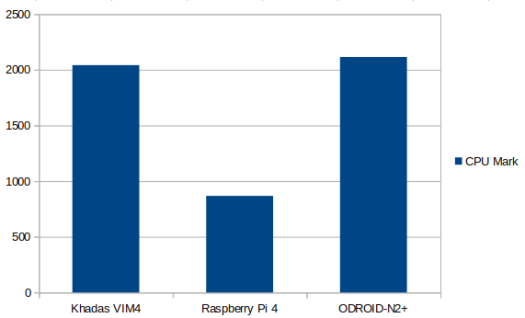 I’ve compared VIM4 results against Raspberry Pi 4 (10 samples) and ODROID N2+ SBC (1 sample) with Amlogic S922X hexa-core processor clocked at 2.4 GHz. The quad-core Cortex-A72 Broadcom BCM2711 processor clocked at 1.5 to 2.0+ GHz can’t keep up with the hexa-core and octa-core Cortex-A73 processors, so it’s not a surprise. ODROID N2+ is a bit faster despite having two fewer Cortex-A53 cores, but the higher frequency does help. It might be possible to overclock Khadas VIM4 too, but this would have to be tested. 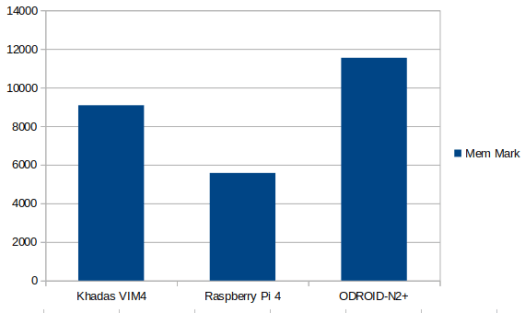 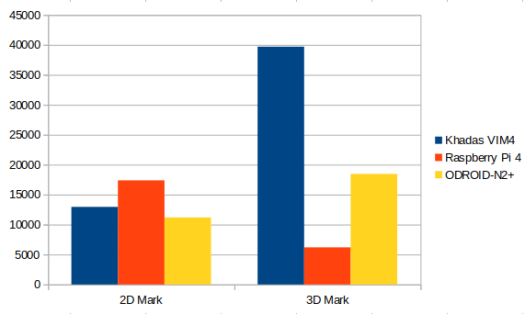 Raspberry Pi 4 outperforms both Amlogic platforms for 2D graphics, but Khadas VIM4 really shines when it comes to 3D graphics with over twice the performance of ODROID-N2+ and 6.4x faster performance than Raspberry Pi 4. So Khadas VIM4 and Amlogic A311D2 processor in general should be a pretty good platform for gaming or other applications that require fast 3D rendering capabilities.

That will be all for Android 11 on Khadas VIM4 SBC for now, I’ll have a bit more to test on Ubuntu 22.04 Desktop with WiFi 6 and GbE networking, storage performance, Linux benchmarks, GPU and VPU support, etc…

Too bad there no current plan to support mainline Linux on this platform, it would be a perfect SoC to leverage Panfrost and be a future proof board like the other VIMs…

You can’t get much more mainline than Ubuntu, ‘Neil’. Panfrost will work just fine.

and this isnt the neil armstrong who does arm developent. it’s a pretender. a liar. a false accuser.

While violating the ‘don’t feed the troll’ rule I think for anyone else who stumbles across your stupid comment some background info is helpful: https://forum.khadas.com/t/khadas-vim4-is-coming-soon/15266/42

See also chewitt’s other comments over there wrt kernel versions and SoC names and what they do not tell: https://forum.khadas.com/t/when-will-we-see-a-vim4/13646/45?u=tkaiser

Is your Rock Pi 3 working yet?

Well you are running a 32 bit version of Android on 64 bit hardware. I don’t know why anyone would ever want to run a 32 bit version of Android today, especially when there is 64 bit Android versions out in the world. Also the benchmark tools might have got stuck (crashed) because it saw 64 bit hardware, and tried to run everything with 64 bit tests instead of using 32 bit tests on a 32 bit OS.

> ODROID N2+ is a bit faster despite having two fewer Cortex-A53 cores, but the higher frequency does help

Nope, that’s just the result of either Khadas’ Android image being crappy or the benchmark (maybe both) since it’s impossible for S922X/A311D to outperform A311D2 with its much better design especially wrt memory.

This Android Passmark reports higher memory performance for N2+ so it’s obvious that numbers are wrong (be it caused by bad settings or bad benchmark methodology).

The A311D2 is just not going to be significantly faster though, so not much of an update really.

When thinking ‘use case first’ with Android the much stronger GPU results in significantly faster ‘gaming’ and related stuff.

And if it’s about CPU horsepower with tasks that are memory heavy performance will currently be boosted by 20%-30% and that’s with boot BLOBs limiting the A73 cores to 2.2GHz and most probably clocking DRAM conservative.

Khadas has updated its Android image and found faster results in Passmark.

I can’t confirm it myself right now, as I don’t have the board with me. I’ll check next week.