If often write about low end and cheaper hardware on this blog, but not in this post. Deepwave Digital Air-T (Artificial Intelligence Radio – Transceiver) is a high-end software defined radio platform with continuous frequency coverage from 300 MHz to 6 GHz.

The board combines AD9371 RFIC transceiver providing up to 2 x 2 MIMO of 100 MHz of receiving bandwidth, a Xilinx Artix-7 FPGA, and NVIDIA Jetson TX2 module. 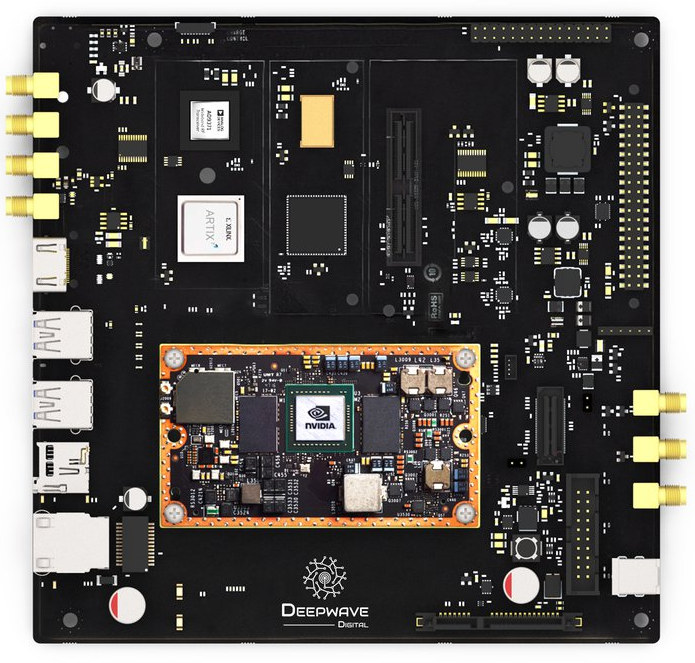 The kit ships with an SD card pre-loaded with Ubuntu 16.04 and various software like SoapySDR (to  port existing GNU Radio applications), and custom GNU Radio blocks. Your can build your own software using the provided hardware drivers with Python or C++. Apparently no VHDL or Verilog is needed, although you could always program the FPGA with those if you wish to.

Low power consumption is achieved by combining the capabilities of the FPGA for strict real-time operations, of the NVIDIA GPU for highly parallel processing, and the Arm CPU for control, I/O, DSP, and software applications.  The system can be used as a highly parallel SDR, data recorder, or inference engine for deep learning algorithms, while the GPU enables SDR applications to process bandwidths greater than 200 MHz in real-time.

The board has just launched on Crowdsupply with the company aiming to raise at least $20,000. Reaching the funding goal would just need four backers since Air-T platform requires a $4,995 pledge with free shipping to the US and $100 shipped to the rest of the world. Delivery is scheduled for the end of November 2018.