But as Embedded World 2021 Digital is taking place virtually until Friday, other companies have now made their own announcements of i.MX 8M Plus SoMs as the processor enters mass production this month, and since as far as I know, it’s pin-to-pin and software compatible with earlier i.MX 8M Nano/Mini SoCs, the update must have been easy. That means we’ve got a longish list of modules, and I have probably missed some. Supported operating systems are basically the same across companies with Linux using Builroot or the Yocto Project running on Cortex-A53 cores, and FreeRTOS on the real-time Cortex-M7 core. Some also offer Android support. 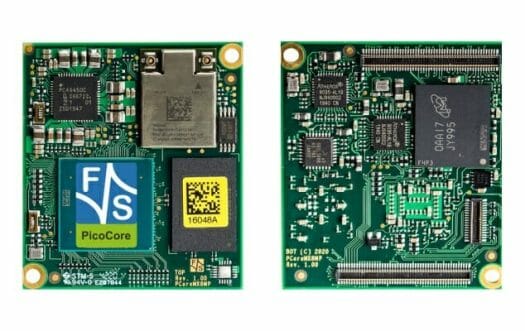 F&S Elektronik Systeme i.MX 8M Plus system-on-module is an update to the company’s earlier PicoCore MX8MN based on i.MX 8M Mini. The tiny (40×35 mm) board comes up to 32GB eMMC flash, 8GB LPDDR4 RAM, and various I/O as described in the block diagram below via board-to-board connectors. 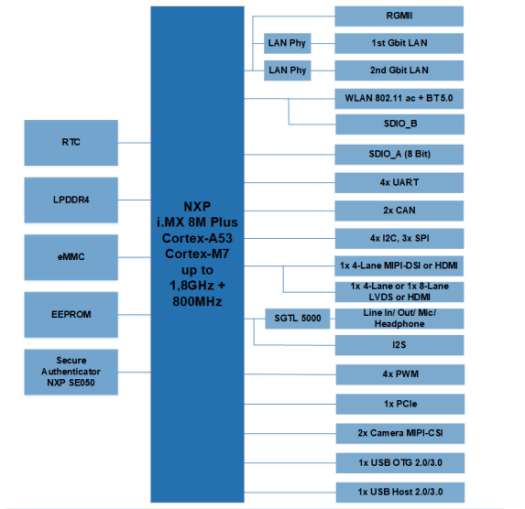 The PicoCore MX8MP starterkit allows you to get started with a baseboard with dual Gigabit Ethernet, MIPI CSI & DSI, USB port, mPCIe socket, etc…, a cable kit, a 7-inch TFT display with PCAP touch panel, and access data to the
F&S download area.

Pricing is available on request, and more details may be found on the product page. 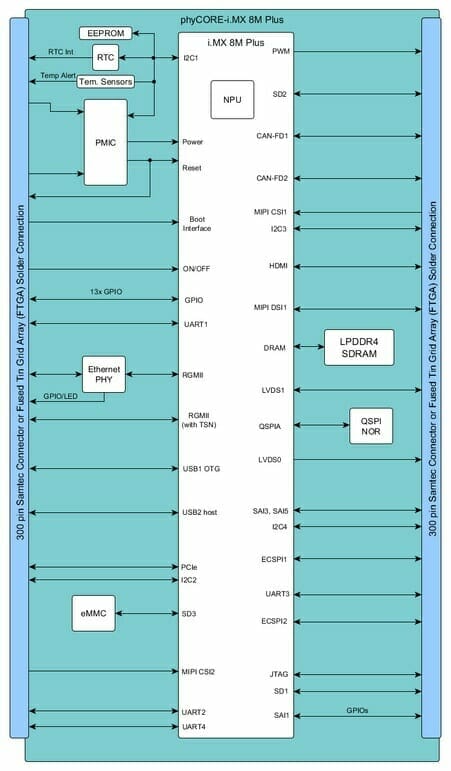 The module is available now at an undisclosed price, while the development kit will shortly be in stock with pricing ranging from € 185,00 to € 274,00.
Visit the product page for more information. 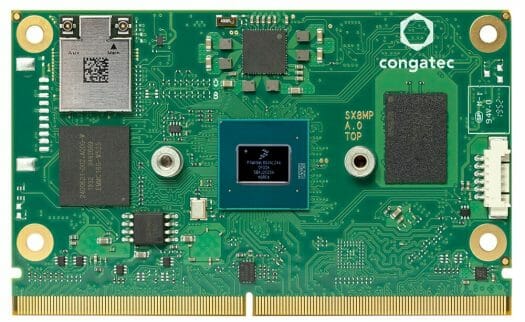 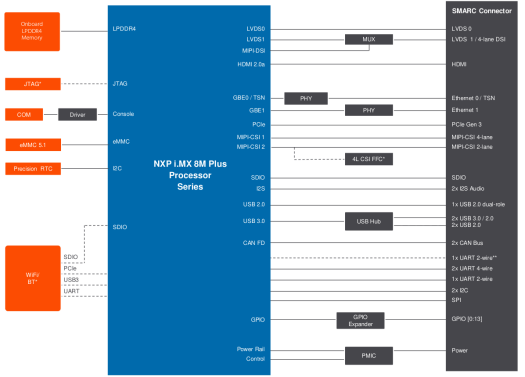 There’s no specific mention of carrier board on the module’s product page, but considering it’s SMARC 2.1 compliant, it should be compatible with the company’s conga-SMC1 3.5-inch carrier board for integration into products and Conga-SEVAL for evaluation and development. 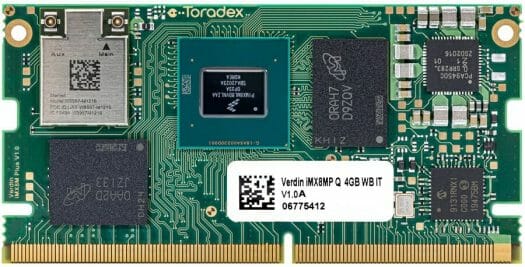 As its name implies, the Toradex Verdin iMX8M Plus module is part of the Verdin family of Arm-based systems-on-module. The module is offered with 16GB eMMC 5.1 flash, and 2 or 4GB RAM, plus an optional WiFi 5 and Bluetooth 5.0 wireless module.

The 260-pin edge connector exposes the usual interfaces with Gigabit Ethernet, USB 2.0/3.0, LVDS, MIPI DSI/CSI, CAN FD, and so on.

Toradex offers two Verdin carrier boards with the Verdin development board and Dahlia carrier board. You’ll find additional details on the product page. 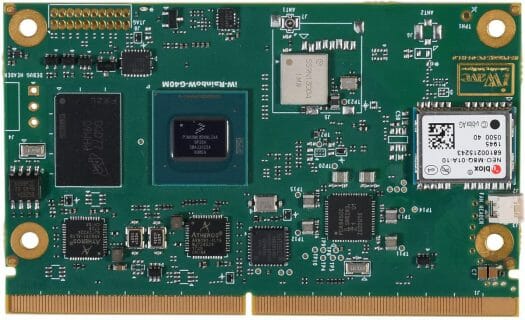 iWave Systems iW-RainboW-G40M is the second SMART 2.1 compliant SoM from our little list. It supports up to 8GB RAM, 128GB eMMC flash, an optional microSD card slot, a WiFI 5.0 and Bluetooth 5.0 module from u-blox, and an optional GNSS receiver with GPS/GLONASS/Galileo/BeiDou support.

Besides the standard MXM edge connector, there’s also an optional camera header with a 4-lane MIPI CSI interface, I2C, and some GPIOs. 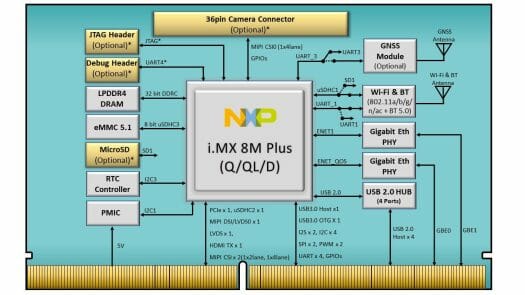 Both the module and devkit appear to be available now, but as in most cases, you’d need to request a quote to find out about pricing. Check out the product page for further information. 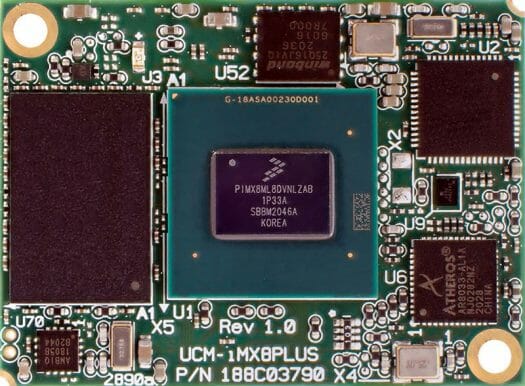 An update to UCM-iMX8M-Mini system-on-module, UCM-iMX8M-Plus is the smallest i.MX 8M Plus module from your list at just 38x28mm, and a weight of 7 grams. 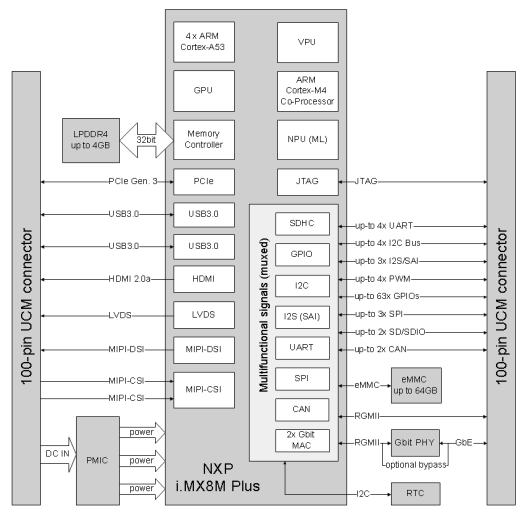 UCM-iMX8M-Plus Evaluation Kit is offered with one UCM-iMX8M-Plus SoM, one  SB-UCMIMX8 carrier board, a 5” WXGA LCD panel, a 5MP camera module, a power supply, cables, and technical support.

Contrary to all other companies from this list, Compulab does provide pricing for the UCM-iMX8M-Plus module with pricing starting at $54 per unit for 1k orders with i.MX8M Plus QuadLite processor, 1 GB RAM, and 16GB eMMC flash. They also provide a handy price guide for options and volume pricing. 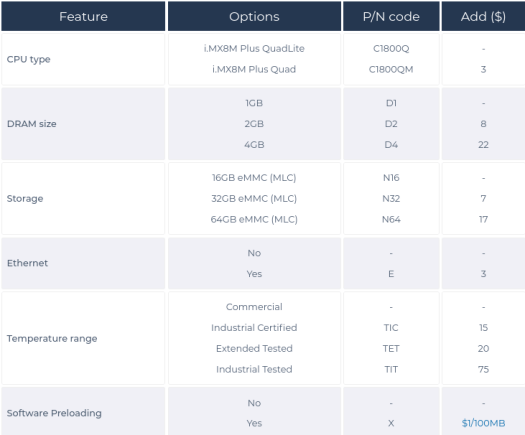 More information about the SoM, devkit, and prices can be found on the product page.

With the 5 modules we’ve covered last year, and the 6 modules from the list there’s some competition! But there are others with i.MX 8M Plus systems-on-module from Boundary Devices, Engicam, and others are coming since we’ll still need that Qseven compliant module…

What the heck are these boards plugging into and can a system be compromised of multiple boards like this? Kinda seems like we’re reliving the S-100 days but with a lot more BUS capacity. For example – what can I plug this GPU board into and start building a system? https://www.cnx-software.com/2021/03/02/nvidia-low-cost-jetson-tx2-nx-so-dimm-module/

Would be really great to have a bus board and power supply and be able to plug various cards like this together to build custom compute instances.

Each and every SoC has such different I/O abilities that picking a ‘standard’ connector pinout/layout seems impractical. All that really makes sense is function specific ‘busses’ like RGMII or eMMC, etc. Stuffing all of that on one to three connectors seems like it is doomed to fail–if the goal is to become some kind of standard.