NXP i.MX 8M Mini has been announced for over two years, so we’ve already written about many boards and systems-on-module (SoM) including Boardcon EM-IMX8M-MINI SBC, TechNexion XORE LGA SoM, or Congatec conga-SMX8-Mini SMARC 2.0 module among others.

NXP i.MX 8M Nano is more recent, and we only covered a few announcements so far namely iWave Systems iW-RainboW-G34M-SM SoM and Conga-SMX8-Nano SMARC 2.0 computer-on-module. There’s now at least a third company working on a “Nano” module with Variscite announcing VAR-SOM-MX8M-NANO SoM together with a “Mini” version called VAR-SOM-MX8M-MINI, and Symphony carrier board and development kits. 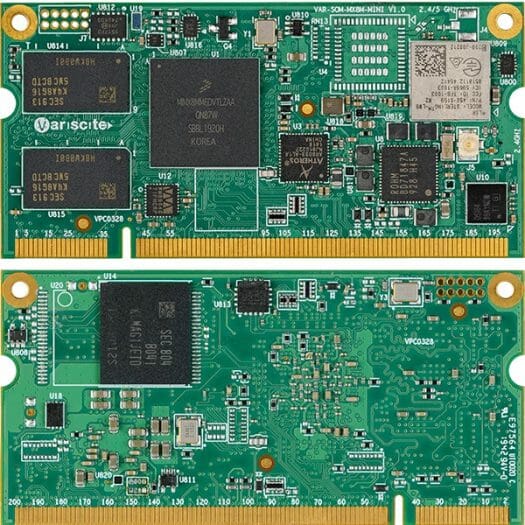 Both modules are part of Variscite VAR-SOM Pin2Pin family, and share the following key features & specifications:

The modules support Linux (Yocto, Debian), Android, and FreeRTOS with the latest running on the Cortex-M core. 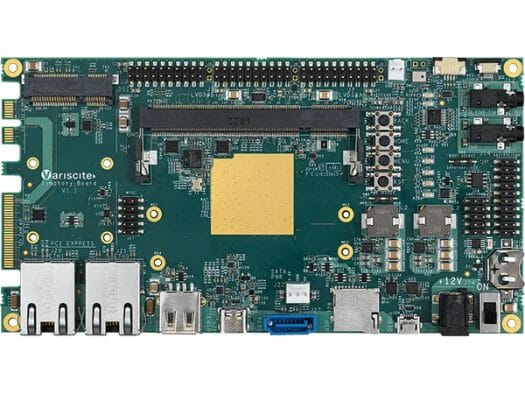 Variscite will provide two evaluation kits for the module: a Starter Kit and a Development kit with more accessories. But both are based on the same Symphony carrier board with the following features:

You’ll also notice some ports that are not in the specifications like an extra Ethernet port, or a SATA port,  but those are probably not listed because they are not supported by the MINI/NANO processors.

The Starter Kit ships with Symphony board, a VAR-SOM-MX8M-MINI module, an antenna, boot/rescue SD cards, a carrier board design package, while the Development Kit adds a 7″ WVGA display with capacitive touchscreen, a micro USB debug cable, an Ethernet cable, and a power supply.

You may have noticed most photos above are about VAR-SOM-MX8M-MINI module and kits, and that’s because the latter was officially launched, we can access the product page and technical documentation, and we already know pricing starts at $53 per unit for 1Kpcs orders.  But VAR-SOM-MX8M-NANO SoM was not launched just yet, and the module is “coming soon” with only the key features and specifications available on the product page.

Versalite is the most exesive single board and som modules. Nxp should provide better Linux support. Nobody wants wasting time building yocto
Linux. It takes 2500 files to compile in sato version. And it s no easy for beginners.