UP Squared Apollo Lake SBC was launched in 2016 via a crowdfunding campaign with a price starting at just 89 Euros for the model with 2GB RAM 16GB storage, and a dual-core Intel Celeron N3350 processor.

AAEON has now announced an update simply called UP Squared Pro with many of the same features, but greater expandability and I/O features, for example, to add 5G modules and AI accelerators through one of the three M.2 sockets, as well as improved security via a TPM 2.0 chip. 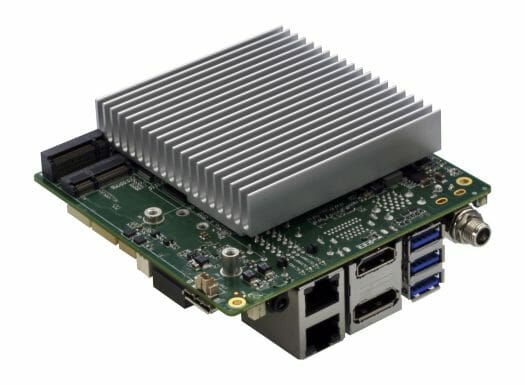 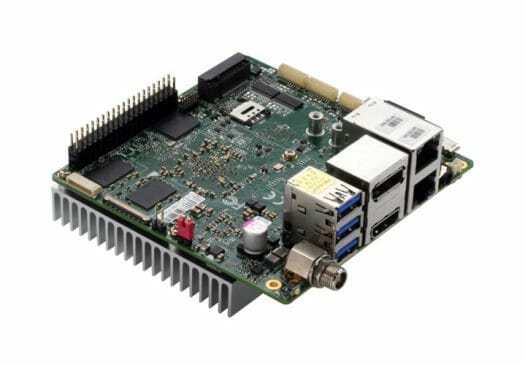 There are many more changes than I initially expected with different video outputs, support for a wide input voltage range, the addition of an audio jack, etc…, while the camera interface and the mPCIe slot are gone. Some available extension modules include AI Core XM M.2 2280 B+M key AI accelerator card with heatsink and a choice of two M.2 2230 WiFI 5 and Bluetooth modules with antennas.

On the software side, UP Squared Pro SBC can run Microsoft Windows 10, Windows IOT Core, as well as Ubuntu 18.04.5 and Ubuntu 20.04 Linux distributions. The board is also compatible with Intel OpenVINO Toolkit for all machine learning and AI applications. 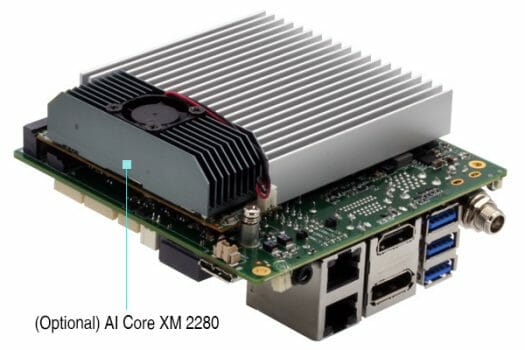 UP Squared Pro can be pre-ordered on UP shop starting at $169 for the dual-core Celeron model with 2GB RAM, and 32GB flash, and up to $319 for the quad-core Pentium variant in 8GB/64GB configuration. Deliveries at scheduled to start later this month. Additional information may be found on the product page.

i guess thats cm, mm would be damm small 🙂

What can the CPLD be used for? Especially as the headers it used to control are gone?

Looks promising as an alternative to the out-of-stock ODROID-H2+. With the three M.2 slots, I think you could have an M.2 NVMe SSD (M-key) and two Coral M.2 TPUs (A+E-key and B+M-key). The ODROID-H2+ is nice though in that it has SATA power connectors and case options that fit 3.5″ HDDs. The UP Squared Pro doesn’t seem to have either. The best option that comes to mind is trying to mount it in a mini-ITX case with a standard ATX power supply and a custom adapter to its power jack. I think it’d be more of a pain to do… Read more »

Most probably doubling idle consumption at the wall due to the PSU’s inefficiency. Since you’re talking about SATA did you realize the above thing only exposes 1 SATA channel?

For specific use cases the UP would be a significant downgrade compared to ODROID H2+.

Thanks for the reminder to look at the block diagram. I see now the B-key M.2 is USB-only. That’s unfortunate. Otherwise, I don’t really mind having “only” one lane per device. That’s still more bandwidth than most things need.

1 SATA is not ideal but still usable for a NVR (where the data typically aren’t important enough for RAID).

>  I don’t really mind having “only” one lane per device

If the block diagram is correct it’s often also just Gen1. Since you compared with ODROID H2+: the key M socket there has 8 times more bandwidth than this UP board (Gen2 x4 vs. Gen1 x1).

> where the data typically aren’t important enough for RAID

The H2+’s Gen2 x4 is massive overkill for my purposes. For me the most exciting thing about it was that (for their recent H2 Net Card) they added BIOS support for using it as “4 bifurcated x1 lanes”. That suggests to me someone could make a cheap single M.2 card with four ($20 each) Coral TPUs. But, sadly, not buy the ODROID-H2+ to put it in. > where the data typically aren’t important enough for RAID Sure, we’re talking a budget NVR for a home or maybe a small business. The videos are ephemeral and on average don’t matter. The… Read more »

over 4 years later we have the same soc & about double the price. strange world we live in.

this is strictly for those desperate for an x86 sbc with three M.2 slots…