Seeed Studio has just unveiled reTerminal HMI terminal that reminds me of the company’s Wio Terminal based on Microchip SAMD51 Arm Cortex-M4F microcontroller with a 2.4-inch display.

But as we’ll look into the details, reTerminal is quite a different beast as a Linux-capable device powered by a Raspberry Pi CM4 module with up to 8GB RAM, equipped with a 5-inch capacitive touchscreen display, and supporting plenty of connectivity options from GIgabit Ethernet to WiFi to LoRaWAN. 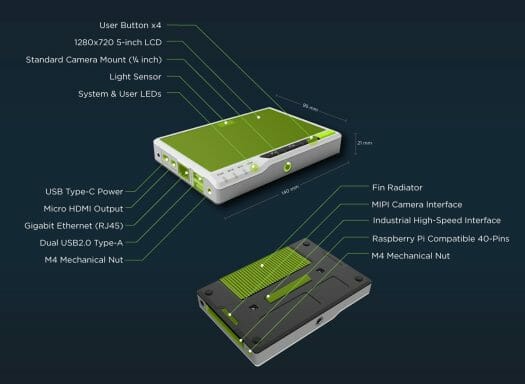 On the software side, the smart display can run Raspberry Pi OS, Ubuntu, or custom Linux distributions built with the Yocto Project or buildroot. Seeed Studio recommends Qt, Flutter, and Electron frameworks to build user interfaces, and also mentions support for some AI frameworks including TensorFlow, PyTorch, Keras, and Edge Impulse that got support for Raspberry Pi 4 very recently.

As you may have noticed from the specifications, reTerminal does not come with a battery and must be powered through a USB-C port. Having said that it’s designed to be modular, and we may soon see a battery module like the company did for Wio Terminal. There are two ways to add expansion modules: through the industrial connector on the back of the device, or the 40-pin GPIO on the side.

There are some “M4 mechanical nuts” to keep the add-on modules in place.

reTerminal HMI terminal will be sold for $195 with a Raspberry Pi CM4 module with 4GB RAM and 32GB eMMC flash. It’s not quite ready yet, as you may have noticed from the lack of photos,  but you may find some additional details on the product page. You could also register your interest to get a small $5 discount…

That’s interesting for plenty of experimental stuff. Just having that small a PC with a display to see/change its IP address, for use as monitoring devices in network racks or various such use cases, it looks well integrated. The price is not cheap but I’m sure it can succeed in some professional environments.

Five inch 1280x720p display, yeah I’m gonna need a +6 diopter/dioptre (16.7 cm or 6.6 inch focal length) pair of glasses for that, not to mention I might put my eye out trying to use a much needed stylus on a screen that small. Also the price seems high to me. The RPi CM4 8GB/32GB w/WiFi costs $65.00 USD qty.-1. But I can’t find a reseller that will quote a price for more than one unit, nor can I find a reseller that has any CM4 stock either! The five inch MIPI 720p IPS cap-touch displays go for around $10… Read more »

$120 for PCB+extra_components+case+design+profit
For low volumes it doesn’t seem excessive as there seems to have been quite some work to reach what looks like a finalized product, and this comes at a cost.

Yeah, the key here is as you said: “low volumes”, but that’s not where Seeed usually lives. However right now I don’t think Seeed has much of a choice, just getting the CM4’s in any meaningful volume is a pipe-dream.

Tablet with VNC (or other remote software) can do everything this does, with potentially better results.

Yeah, but a cheap tablet with a bubble-gum strange SoC is not the same as having a community supported CM4 at it’s heart. I think that adds a lot of value. But again, the 5″ display is too small IMHO.

Honestly, even though I LOVE the RPi ecosystem, I would pass on this. I don’t see the value with the hardware and use-case. Personally, I would simply use a cheap Android phone with a VNC connection to a headless RPi. You get a smaller form factor, large battery, added durability, effective probability, wireless charging (depending on phone), and available redundant comms through cell. You don’t lose anything, as the RPi still has the GPIO and Linux environment. By dealing with the RPi separately, you don’t need to make it “pretty”, and can simply leave the Pi in a closet with… Read more »

In theory it is. In practice it’s common to consider as HMI what allows a human to interact with the device, otherwise even an LED is HMI. But an LED + a button probably qualify 🙂