The UP 4000 is a credit-card / Raspberry Pi-sized single board computer based on an Intel Apollo Lake processor. AAEON sent me the model with an Intel Atom x7-E3950 quad-core processor, 4GB RAM, and a 64GB eMMC flash, and in the first part of the review, I installed Ubuntu 22.04 since the board would initially only boot to the UEFI shell out of the box.

I’ve now spent more time with the board, and in this article, I will report my experience with the UP 4000 SBC running Ubuntu 22.04 checking out features, performance, video playback, power consumption, and so on. 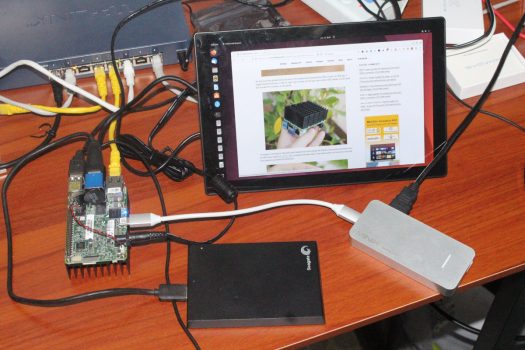 Let’s check out some information after I’ve upgraded the system to the latest packages:

Everything looks good with an Intel Atom E3950 processor detection together with 3.68GB RAM and a 56.53GB rootfs EXT-4 partition. 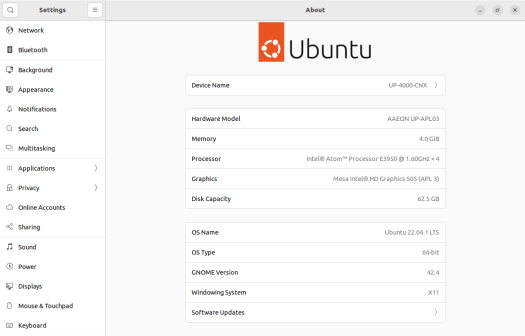 There may also be some issues with drivers in Ubuntu, so I tested the main hardware features from the UP 4000 board:

There’s clear a problem with the USB Type-C port that is supposed to be USB 3.2 Gen 1, but the MINIX dock is connected at 480 Mbps instead:

I previously tested it at 379MB/s for sequential read speeds, and 240+MB/s while connected to the DFI GHF51 SBC running Ubuntu 20.04.

So I moved the ORICO enclosure to the USB Type-C port, and tried again:

The results are fine with close to 400MB/s sequential read and write speeds. It’s just that something odd happened with the MINIX USB-C dock… So apart from that little interoperability issue, all main features work fine on the UP 4000 board.

Let’s start with the SBC Bench script from Thomas Kaiser:

The CPU temperature never exceeded 57.0°C in a room with an ambient temperature of around 28°C, so the thick heatsink that ships with the board is perfectly suitable.

The board is similar in size, features, and target market to the DFI GHF51 SBC with an AMD Ryzen Embedded R1606G processor (dual core/4-thread) I reviewed in 2020. So I’ll compare the performance between the two boards for reference. 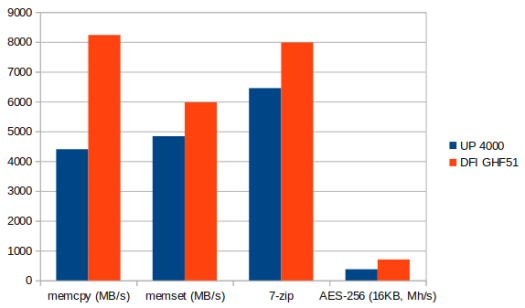 The dual-core AMD Ryzen Embedded single board computer is quite faster than the UP 4000 Apollo Lake board.

But if we look at Phoronix Test Suite benchmark results, the performance differences are more mixed, but anything that heavily relies on the CPU performance seems to favor the AMD SBC, sometimes by a wide margin.

Somehow the UP 4000 SBC looks to perform better than the CHUWI GBOX Pro mini PC with the same Intel x7-E3950 CPU, but that was tested with Ubuntu 18.04, so the software has changed too. You can check out the full results on Openbenchmark.org.

The results are non-conclusive, so whether the Celeron N3350 or the Atom x7-E3950 is better will depend on your specific application. As a side note, the Rockchip RK3588-powered Khadas Edge2 Pro is in a league of its own against the other boards from this list. Again you’ll find thefull results on Openbenchmarking.org.

Around 234MB/s and 191MB/s sequential read and write speeds are pretty good for an eMMC flash, and random I/O results look fine too.

We’ve already tested USB 3.0 storage performance on the USB Type-A and Type-C ports and found it was possible to transfer data at around 400MB/s as expected.

I went with the usual Unigine Heaven Benchmark 4.0 to test 3D graphics performance in Linux. 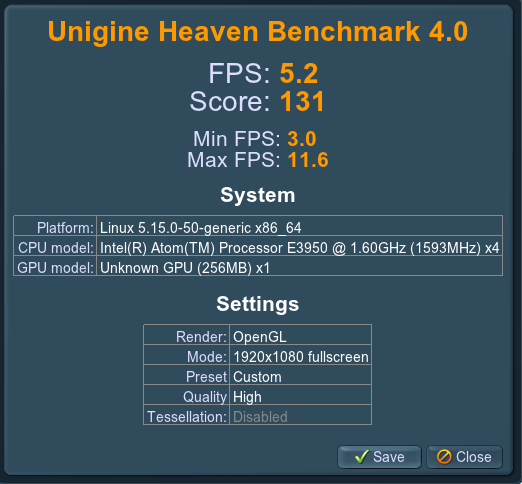 I was expecting the GPU to be one of the weakest points of the Atom x7-E3950 SoC, and while it’s clearly not a gaming workhouse, the 3D graphics performance is similar to the one I got with the Ryzen Embedded R1606G processor with Radeon graphics found on the DFI GHF51 SBC, or 5.4 fps, 135 points. I did not see any of the artifacts I experience with the Ryzen board either.

Playing a YouTube video in Firefox up to 1920×1080 is fine, but just a couple of frames dropped at the beginning. But I’m not able to select higher in Firefox. 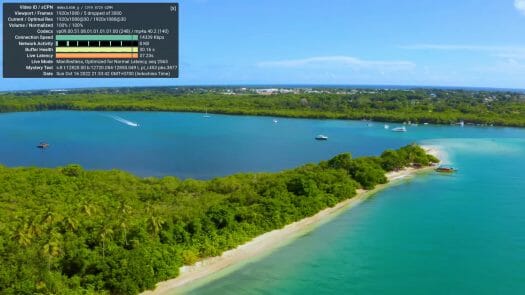 I switched to Chrome and I could play both 1080p and 1440p videos smoothly, but 2160p (4K) had many dropped frames and the loading icon was showing often despite the network buffer being close to full at all times. 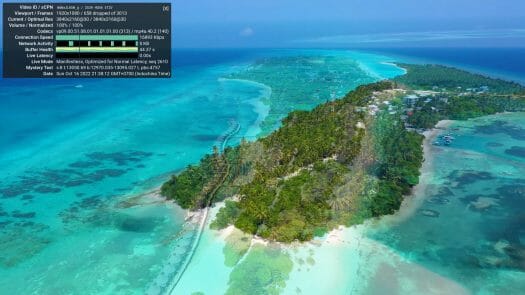 All video play with hardware video decoding and are smooth, except for one 4K 10-bit H.264 video that is not supported by the hardware, and the processor is not powerful enough to handle it with software video decoding.

Finally, I measured power consumption with a wall meter:

Note: An HDMI monitor, a USB keyboard, and a USB mouse were connected to the board, and no other peripherals.

I’m very pleased with the UP 4000 single board computer as everything basically worked out of the box in Ubuntu 22.04 with stable operation and good performance considering the processor used. I only had one problem with a MINIX USB-C dock that was connected at High-Speed (480 Mbps) instead of SuperSpeed (5Gbps), but the same issue did not happen with an ORICO SSD enclosure. You’ll get a clear boost in terms of performance compared to a Raspberry Pi 4, but the Intel Atom x7-E3950 is usually a bit slower than the AMD Ryzen Embedded R1606G processor found in the DFI GHF51 credit card-sized SBC I tested a couple of years ago. You’ll also get community support from the UP community with forums and a wiki.

This 2016 Atom has basically 1/2 the single and multi-thread performance of the Celeron N5095, or if you’re familiar with the 2016 Celeron N3350, it’s equivalent to that but with twice the cores, and twice the TDP. In other words, it’s a dog, but it’s a dog with 4 cores, so it can run modern office apps or a web browser without chugging too badly.

The 2021 Elkhart Lake Atoms have numbers beginning with x6….

There are a bunch of boards with Elkhart Lake processors, including the UP Square 6000 from AAEON/the Up community @ https://www.cnx-software.com/2021/12/16/up-squared-6000-aaeon-elkhart-lake-sbc-and-edge-computer/

You can find more some of those @ https://www.cnx-software.com/news/elkhart-lake/, albeit some will only be offered with Celeron/Pentium Elkhart Lake parts.

Thanks! I had thought that Atoms would be lower price, but I might be confusing with lower power. I see the Atom version of the Up Squared boards are more expensive than the Celeron and Pentium versions. I wasn’t able to find any Elkhart Lake Atom SBC or mini PCs with a listed price of under €150 or so. Most seems to be for industrial, IoT or robotics applications. What I’m searching for is simple enough: the cheapest Intel SBC or Mini PC that supports H265 hardware encode. The Up Core using the 2016 Atoms cost €39 a few months… Read more »

In addition to my other comments, the 2021 Atoms are listed here:
https://ark.intel.com/content/www/us/en/ark/products/series/87465/intel-atom-processor-x-series.html