Since I was often asked which TV box to buy, I wrote a guide entitled “What’s the best Android TV box?” in April 2016. Time has passed, new products have launched, I tested more devices, and got further reader feedback, so it’s time for an update.

There’s still no device that rules them all, and since everybody has different requirements and price points, what could the best Android TV box ever to one person, maybe be a piece of junk to another. Before purchasing a TV box, you should consider what you plan to do with it, and find the device with matches your needs and budget. So first, I’ll provide a list of things to look for – beside the SoC/RAM selection – before selecting three TV boxes that stand out (in no particular order), as well as alternatives worth looking at.

Things to Look for

The list is basically the same as last year, except I added two sections for operating systems, and extra features:

Just like MINIX NEO U1 I recommended last year, as long as you don’t need Netflix Full HD or 4K UHD playback, and are happy using their custom launcher and an air mouse, MINIX NEO U9-H should definitely be in your list of devices to consider. Please read MINIX NEO U9-H review for details, taking into account that some bugs may have been fixed since my review in March 2017.

U5PVR Deluxe made it to the top three list because of all the extras like tuners and a 3.5″ SATA drive, and the fact that it runs both Android TV OS (unofficial) and Debian.

If you live in a country where DVB-T/T2 is supported (or various combination or DVB-T/T2/C, ATSC, DVB-S2 if you purchase an additional tuner board), and plan to use the Linux NAS features, U5PVR Deluxe looks certainly like a good candidate. However, if you mainly want to watch video streams from Netflix, Hulu, and other premium services, and use Kodi, there should be other devices that better fit your needs.

Price: $229.99 including shipping on Aliexpress. 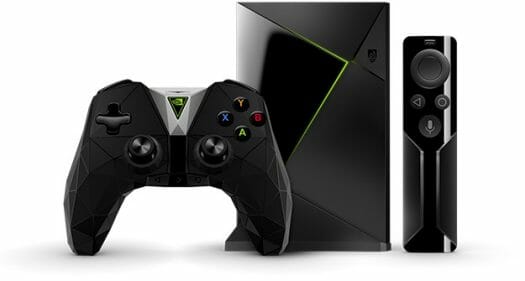 NVIDIA has launched a smaller version of their popular Shield Android TV earlier this year, and while I have not reviewed the device myself, it’s one of the most popular Android TV box on the market.

NVIDIA TV box also features the most power GPU of any TV boxes, so it’s also an excellent 3D gaming console. Availability is still an issue, although the company has launched the model in some more countries this year. This also means the device can be pretty expensive once you factor shipping, custom duties, and other fees (e.g. forward shipping) if you purchase it from a country where the device has not officially launched. Just like other devices running Android TV OS, not all apps will be available from the Play Store.

The three devices are not the only ones to consider, and other alternatives could meet some people requirements.

I hope this guide will help some to decide on which model to buy. Feel free to comment if you think another model should be part of the top 3, or the list of alternatives.

Great, I was looking forward for this article. Thanks

From personal experience, the best Android TV box is a Wintel PC.

Most Androids apps have a Windows equivalent (Kodi for example) but if you do find an Android only app that you just gotta have, there are a number of very competent Android emulators. One of my favorites is Nox Player.

Personal opinion: Android as an OS is designed to promote hardware sales. If you like disposable hardware, Android is definitely the way to go.

I can get an Android TV box that will hardware decode UHD Blu-ray remuxes for $40. That’s not happening with a “Wintel” box

Are there any news reports about an AmLogic-based Android box which would come pre-installed with Oreo?

And some news about AmLogic’s upcoming SoCs – a new roadmap?

@Ron
Not sure about the status if the Oreo SDK, maybe it’s too early, even official Android TV devices like the Nvidia shield are still on Nougat.

Not leaked roadmap this time.
By this time, I would have expected Amlogic S805X devices to come out (low cost version up to 1080p), but maybe they canceled it.

MIPI DSI probably means S92x chip will be used in 2-in-1 hybrid, or tablets.

My vote is Nvidia shield. 2 years old now going strong. Still getting updates. I got the home automation dongle but have not turned it on yet. I use gamestream from PC and Plex server and all the video apps. Only down side we have is no native app for DirecTV Now but that is not Nvidia fault. Have to cast from phone or tablet.

You are doing a great disservice to your readers by failing to differentiate between the Xiaomi MiBox MDZ-16-AB which is the only box from Xiaomi that carries official AndroidTV and its requisite DRM facilities and licenses. Xiaomi makes a plethora of boxes, all of which are specifically designed for their home market in PRC with the sole exception of MDZ-16-AB. Only the MDZ-16-AB can be used to its fullest extent in all international markets and owners can be assured of Netflix support in HD and UHD, Chromecast function and allied DRM priveleges, as well as a full gamut of language… Read more »

it’s all about expectation. If you expect only one function, go with the cheapest box that provides it.

But if you expect more longevity and versatility, I would recommend a different approach.

We plan to support the same Android TV OS as U5PVR in U5 SBC (Single Board Computer) next year (2018) in small size board (GPIO 40pin support).

@EddyLab
Looking forward to seeing your U5 SBC.

You may consider making your firmware easier to find, maybe as pinned post. I’m unable to find ATV 7.0 official release in your forums. I could not find any demo about Netflix 4K either (only 480p).

@Jean-Luc Aufranc (CNXSoft)
Hello CNX! I am using U5PVR Deluxe too!
I also had trouble finding the firmware. I’ll give you a link.

@Jean-Luc Aufranc (CNXSoft) OK, so I got email answer from Vivant: We do not have the contract but Netflix 4K works. I believe we are the only one so far. We did a lot on our own firmware side to make this happen. As you have the very first batch of boxes, you might have to go through all the major updates: -Major update from Android 5.1 to 7 -Major update for DRM -Major update for Dual boot Android+Enigma 2 The easiest way is to program the box with a production firmware. You might need my teamviewer help. There are… Read more »

@djjproject
Thanks for answer. I cleaned up the many external links, since I got answer from Vivant above.

@Jean-Luc Aufranc (CNXSoft)
I had the same problems. The most important thing to know is, that you have to **manually** do the major upgrade from ATV5 to ATV7 following the instructions posted in their blog.