So I considered making an rc8 all the way to the last minute, but decided it’s not just worth waiting another week when there aren’t  any big looming worries around.

Because despite the merge window having been very large, there really hasn’t been anything scary going on in the release candidates. Yeah, we had some annoying noise with header file dependencies this week, but that’s not a new annoyance, and it’s also not the kind of subtle bug that keeps me up at night worrying about it.

It did reinforce how nice it would be if we had some kind of tooling support to break nasty header file dependencies automatically, but if wishes were horses.. Maybe some day we’ll have some kind of SAT-solver for symbol dependencies that can handle all our different architectures and configurations, but right now it’s just a manual pain that occasionally bites us.

Aside from silly header file noise, the last week was mostly dominated by the networking pull, which accounts for about half of the changes (mellanox drivers and selftests stand out, but there’s other smaller things in there too). Some RCU fixes stand out.

Outside of the networking stuff, it’s mostly various small driver fixes (gpu, rdma, sound and pinctrl being much of it), and some minor architecture noise (arm, x86, powerpc). But it’s all fairly small.

So there it is, a shiny new kernel. Give it a whirl before all you people start sending me the pull requests for the merge window, which I’ll start handling tomorrow..

Linux 5.7 added support for a better exFAT implementation, thermal pressure in the task scheduler, and removed the 80-column warning for developers, among many other changes. 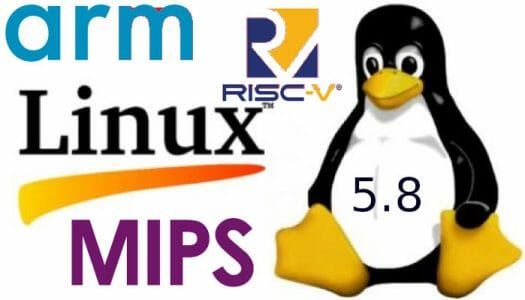 Some of the highlights for Linux 5.8 release include:

Seems Allwinner/Sunxi is nearly there, Rockchip is getting closer.
Amlogic is steady but slow, probably by 5.29 it will be complete 😉
If Qualcomm wouldn’t kick out so many new SOCs every other month with that speed mainline could catch up
Mtk is still kind of the same…

Cannot talk about it’s Linux support but the H616 seems a overheating disaster in TV boxes. Some refuse to review the H616 boxes anymore.

No SDK, No Datasheet, No User Manual for any recent
Allwinner SoC = no mainline 🙂

But they are mainlining A100 tablet SoC themselves 🙂