Allwinner H3 SoC has now found its way into many low cost development boards, including several Orange Pi Boards, Banana Pi M2+, NanoPi M1, and Olimex H3-OlinuXino-NANO, and it might be difficult to choose among the list of boards available, so tkaiser has written a buyer’s guide for boards supported by Armbian, with some of the key differentiating factors, and on my side, I thought it might be a good idea to draw a comparison table between the boards. 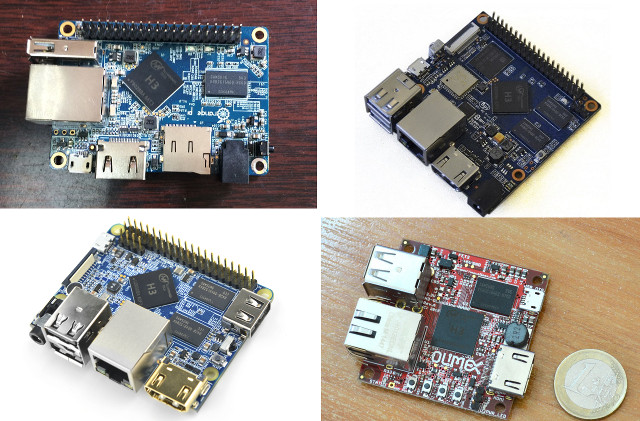 Since a table with 10 boards would be hard to read, I made two tables: one with boards with 512 MB RAM + Orange Pi PC / PC Plus, and a second table with higher end boards with 1 to 2 GB RAM, and more features. But first let’s talk about Allwinner H3 SoC since it’s common to all boards. It’s a quad core Cortex A7 processor clocked at up to 1.2 GHz (plus if overclocking but this may lead to overheating), with a Mali-400 MP2 GPU, and support for H.264 and H.265 videos up to 4K @ 30 Hz.

With this mind, the first table takes care of the ultra-low cost boards that sell for less than $20, except the Olimex board which has not been released yet, and could  cost a little more.

Followed by a second table with boards with more memory, fast storage, Gigabit Ethernet, and so on.

Please let me know if I should add anything to the table, or corrections need to be made.