MINIX NEO U22-XJ Android 9.0 media hub was first unveiled at IFA 2019 last September. It is the first TV box that I know of equipped with Amlogic S922XJ processor that adds Dolby Vision and Dolby Audio licenses to the more common Amlogic S922X processor.

The company has now announced the device will launch on Monday, March 2nd 2020 but without providing any price information. As usual, we know need to wait until the official launch date to find out as MINIX NEO U22-XJ can already be purchased on “MINIX Official Store” in Aliexpress for $169.90 including shipping. 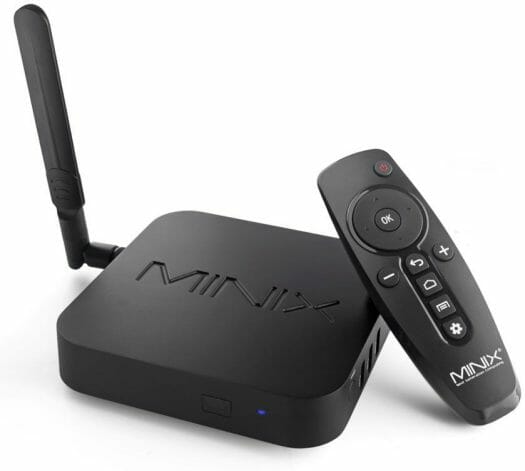 MINIX NEO U22-XJ main specifications haven’t changed since the initial announcement, but we do have a few more details:: 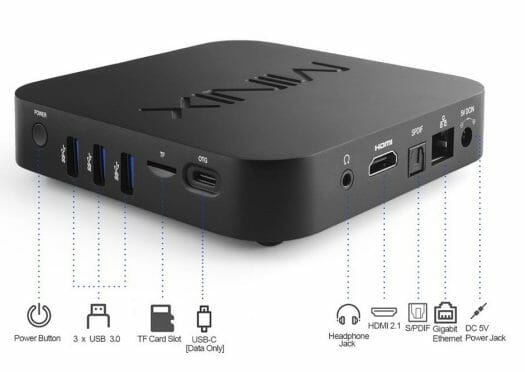 The fanless TV box runs Android 9 (i.e. not Android TV), and ships with a power adapter, MINIX IR remote control, and a user manual. There are also bundles with either MINIX A2 Lite ($184.90) or MINIX A3 ($189.90) air mice which makes using Android much more enjoyable, but your mileage may vary as it’s also a matter of taste.

MINIX NEO U22-XJ will deliver much better overall performance compared to MINIX NEO U9-H released in 2017 with an Amlogic S912 processor and Andriod 6.0 OS. Video playback may be only slightly better although it’s the first Amlogic box to support Dolby Vision HDR format, but the difference will especially be seen for other tasks such as browsing the web or playing games.

If you’re not a fan of purchasing goods on Aliexpress, MINIX NEO U22-XJ will eventually be found on Amazon and other resellers of MINIX devices.

I would rather use Aliexpress than Gearbest, their insurance and customers promises are a joke.. Of the times Gearbest have took the money, never sent the orderd goods or sent boxes with random broken parts in, then thank god for Paypal. Once Paypal involved, they pay up, no more messing the purchaser around.
On Aliexpress they sort it out never need to involve payment company.

UGOOS AM6 Plus as well now on aliexpress.

The Amazon Cube is also an Amlogic S922XJ device and supports 4K Netflix, Amazon Prime Video & Disney+ with Dolby Vision and is $50 cheaper. MINIX will really need to pull a rabbit out of a hat to convince users to pay more for no legal streaming services support. It also looks like the device runs tablet firmware according to other reviews and not AndroidTV.

Not only other reviews. I explicitly wrote: “The fanless TV box runs Android 9 (i.e. not Android TV)”.
I can see Amazon Cube does support Dolby Vision, but based on what I just read on the net the processor is named Amlogic S922Z. I wonder if there are any differences against S922XJ.

For $170, they should’ve implemented Bluetooth 5.x, unless it’s limited by the chipset itself

It’s great that Minix is rolling out new gear. The only problem is that I already have a Minix U9 which is their previous model. Minix refuses to update the firmware so that current versions of Apps in Google playstore like Netfix, CW, and Disney plus (to name a few) will work. So be warned. This may work great at first, but when your version of Android is not compatible with apps in the Playstore anymore , Minix will just make a new box and forget about you.. Go to the Minix forums and you will see how users are… Read more »

One reason I will never buy a minix device again.

If that many crowd fund to pay Minix or Amlogic for updated Android.

Official MINIX U9 Firmware support stopped at Android v6.x (GLES 2.0) – when MINIX should have been giving users official support up to Android 7.1 – which brings with it extra optimisations like GLES 3.1, which makes a noticeable difference to usability and Apps compatibility. (I know I’ve hacked it in to v6.x) http://openlinux.amlogic.com/Android/Mbox Not upgrading an Android OS on expensive Android hardware, especially when it’s been widely available on other devices is Marketing suicide these days, especially when living in the Shadow of the similarly priced Nvidia Shield – and the OS support it gets. So the real question… Read more »

Have you been on freaktsb? See if Superceleron, a amazing Android rom maker is still there give him due respect, he deserves it.

Yes I know all about the 3rd party ROM developers.

The real question potential customer want answered is are MINIX themselves going to provide OS upgrade support for the expensive products they sell ?

That is exactly what customers want in 2020.

I’ve seen total silence when this question gets asked, even pushback by MINIX themselves telling customers not to ask difficult Firmware related questions. It really is not good enough.

The launch has been delayed:

Unfortunately, due to the ongoing Coronavirus situation, we regrettably must postpone the release of our next-gen flagship 4K Ultra HD Media Hub – MINIX NEO U22-XJ by four weeks.
–
MINIX NEO U22-XJ will now be officially released on: Monday 30th March 2020.