Despite assurances by Eben Upton that there’s no supply shortage of Raspberry Pi CM4 modules for commercial and industrial customers, installations or projects requiring just a few modules may be out of luck. So alternatives are needed, and after seeing Rockchip RK3566-based SoMs compatible with Pi CM4, namely the Pine64 SoPine and Radxa CM3, Banana Pi is working on a Raspberry Pi CM4 compatible module powered by Amlogic A311D hexa-core Arm Cortex-A73/A53 processor. 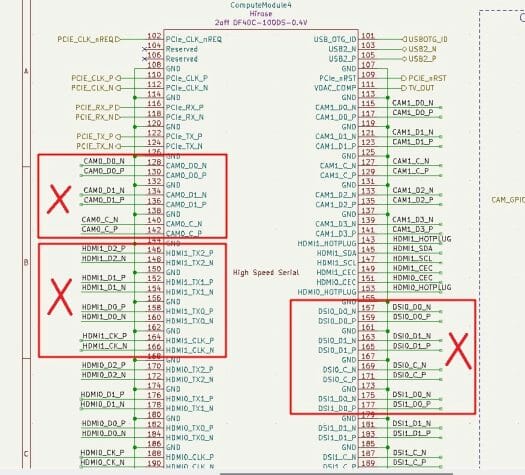 Amlogic A311D processor may not a bad choice, as for instance it is found in Khadas VIM3 SBC, an Android reference board, and with proper cooling, it will be quite faster than the Broadcom BCM2711 found in Raspberry Pi CM4, even when the latter is overclocked to 2.0 GHz or more.

The WiFi 6 option may be interesting, but I’ve been told about cooling issues with WiFi 6 under load (i.e. sustained high-speed transfer) on a similarly sized module.

Banana Pi is only showing renders, and based on my previous experience with their announcements, that may mean Banana Pi BPI-CM4 availability in Q4 2022 or Q1 2023. The company is not known for attention to detail either, so expect poor documentation and Linux and Android images that boot but could be filled with bugs. The good news (sort of) is that it should be possible to evaluate the software in advance in the soon-to-be-launched Banana Pi BPI-M2S SBC also powered by the Amlogic A311D SoC. More details may be found in the forum thread on the Banana Pi website.

Via Tom’s Hardware and Liliputing

If the SinoVoip clowns would be smart they could try to hurry up with a Wi-Fi-less variant of this A311D thing to partner up with Turing Pi. If their Turing Pi 2 cluster board will (ever) be shipped it might be a great idea to have at least something somewhat affordable and available to use as ‘cluster nodes’ in those 4 module slots (neither CM4 nor Jetson Nano seem to be available to individuals/hobbyists).

Apparently they are not smart enough 🙂 A311D can support dual MIPI CSI, the 4-lanes MIPI CSI can be split into two 2-lanes MIPI CSI.

You can get a Jetson Nano 4Gb right now. Amazon had sellers price gouging for only a mere $400 last time I checked…? …Smh…It’s unbelievable; I can’t imagine demand is dictating a price like that…

Better check Waveshare shop: ‘Jetson TX2 NX’ for less bucks and available. Twice the CUDA cores and at least two ‘NVidia Denver 2’ CPU cores in addition to those lame four A57 on Nano (A57 has been launched a decade ago).

Tegra X1 on the Nano is obsolete tech and a rather poor CPU choice if you can not make use of the GPU cores.

Yes, I am aware the Tegra X1 is dated. You said there were no Nanos available for hobbyists to use in the Turing Pi 2—But! Of course there are! Really; there are people on Amazon willing to send you one at 4x launch MSRP… (i.e., I know what you mean w unavailable product; there are vultures selling the Nano for $400 on Amazon. No one should consider spending that. ….I failed at humor…).

Think its the usual as everywhere with normal prices seems sold out.
https://thepihut.com/products/nvidia-jetson-nano-4gb-developer-kit

Depending on costs you could go with a whole new board?

A311D2 is an entirely new SoC with no upstream support so you’d be firmly locked into the vendor BSP codebase (it’s ugly but works). In comparison A311D/S922X have good upstream support (aside from the video decode/encode drivers)