Linus Torvalds announced the release of Linux 6.1, likely to be an LTS kernel, last Sunday:

So here we are, a week late, but last week was nice and slow, and I’m much happier about the state of 6.1 than I was a couple of weeks ago when things didn’t seem to be slowing down.

Of course, that means that now we have the merge window from hell, just before the holidays, with me having some pre-holiday travel coming up too. So while delaying things for a week was the right thing to do, it does make the timing for the 6.2 merge window awkward.

That said, I’m happy to report that people seem to have taken that to heart, and I already have two dozen pull requests pending for tomorrow in my inbox. And hopefully I’ll get another batch overnight, so that I can try to really get as much of the merge window done with early. We all want to have a calm holiday season.

And because of that “we all want to have a calm holiday season”, I want to re-iterate that I’m going to be pretty strict about the merge window rules. The rules are that the pull requests sent to me during the merge window should have been ready _before_ the merge window, and have seen some time in linux-next. No last-minute batch of experimental new development that hasn’t been seen by our test automation.

So to make my life easier, I will just drop any pull requests that come in late, or that look like they haven’t been in linux-next. This time of year, we’re all going to be much happier to deal with the stress of the season _without_ having to deal with the stress of any late development. So if you already realize that work hasn’t been in linux-next, let’s just all agree to not even send me the pull request at all, and we’ll all be happy with the calm end-of-the-year season. Ok?

Anyway, I think I’ve harped on that enough, let’s just enjoy this release and the upcoming festivities. As can be seen from the shortlog below, last week really was very quiet, and it’s mainly a few last-minute fixes mostly dominated by drivers (networking in particular, but there’s some media, HID and GPU noise in there too).

The earlier Linux 6.0 release improved energy utilization, brought some additions to the OpenRISC and LoongArch architectures with, for instance, PCI buses support, implemented version 2 of the Btrfs “send” protocol and the H.265/HEVC userspace API was declared stable. 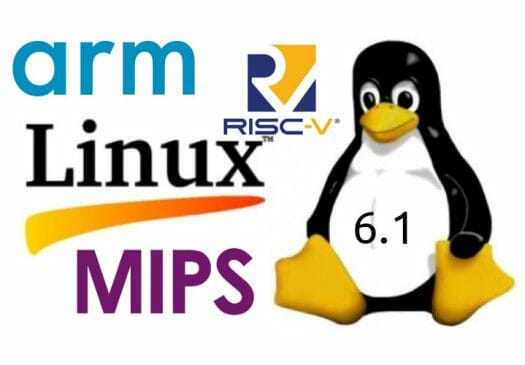 Some interesting changes in Linux 6.1 include:

Some of the changes for the RISC-V architecture include:

There was still some limited activity for the MIPS architecture on Linux 6.1:

A complete Linux 6.1 changelog with commit messages only is also available, generated with the command git log v6.0..v6.1 --stat. A thorough changelog can also be found on KernelNewbies website.

In February 2023, StarFive will start delivering the VisionFive2 SBC(~100$) from the KickStarter campaign. An afffordable device that will allow more people to test/to improve the Risc-V support in Linux.

They are shipping now, but only the version with Fast Ethernet and GbE.
I’ve been told mine with 2x GbE would ship by the end of the year.

“holiday season” lmao. For ages it was ok to call it Christmas and now suddenly ain’t politically correct. This world is coming to an end 🤣

I don’t see any mentions of “Volterra” in the changelog. Are you sure it’s part of Linux 6.1?
Reading the news I only some people trying to run Linux on it.

I wasn’t tracking any specific commits so this isn’t an error on your part. The more successful attempts to run Linux on volterra need kernel customisations, I hope those make it upstream one day so my lazy self can use them.